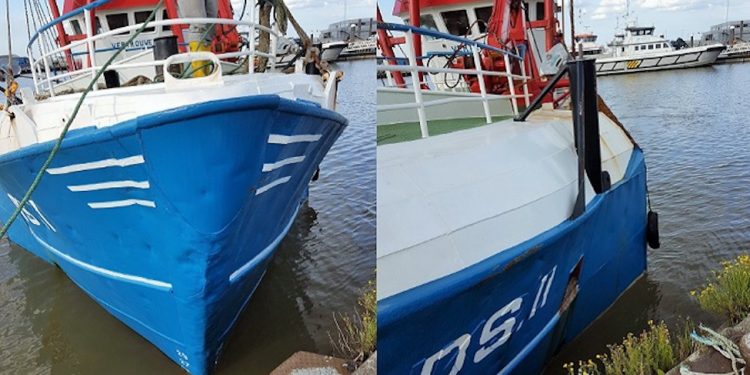 The skipper of a scalloper has been handed a twelve-month prison sentence for failing to keep a proper lookout during an incident in 2017 in which a small boat was swamped and three of its four occupants lost their lives.

Vetrouwen was leaving Shoreham on 6th August 2017, and passed so close to motor boat James 2 that it was swamped and sank. Only one of the four men on board was picked up alive, after having been in the water for five hours.

The single survivor gave Lewes Crown Court an account of the incident, and that the four men had seen Vetrouwen approaching, had tried to make its crew aware of their presence, and despite this, the scalloper continued on the same course and at the same speed and their boat was swamped by waves.

He described having a clear view of the Vertrouwen’s deck as she passed by and that he couldn’t see anyone there.

Investigations showed that both Vertrouwen’s main and back-up radars of the were replaced on 3rd August 2017, just days before the incident happened, and checks were made to ensure they were working.

The first mate also confirmed that the radar equipment was working correctly when he took over the watch just hours after the incident.

Evidence also showed that skipper David Marr appeared to be using the ship’s laptop computer around the time of the incident and was also sending WhatsApp messages to a friend.

‘It was our case that David Marr had not been paying sufficient attention, if any, when he was on watch. Had he done so, he would have seen the men on the James 2 as he headed close to them, who were frantically signalling to him in a bid to avert disaster,’ said Libby Clark of the Crown Prosecution Service.

‘Instead of constantly checking to ensure he knew what was out there, it appears he was doing other things and, even after his actions caused the James 2 to sink, he continued to sail on, oblivious to the fact that three men were about to die as a result of his not keeping a proper look out.’

David Marr was convicted of failing to maintain a proper lookout, contrary to regulations 4 and 6 of the Merchant Shipping (Distress Signals and Prevention of Collisions Regulations).

‘The evidence showed that he would have been able to see the lights on the boat for six minutes before the near miss, yet he continued to sail directly towards the boat with tragic consequences,’ Libby Clark said.

‘It was not unusual for small fishing boats, like the James 2, to be in this area and the defendant should have been alert to that and the fact that small vessels may not be detected by radar at an adequate stage. David Marr should have been using every means available to him, as required by maritime regulations, to establish what, if anything, might be in the sea ahead of or around the ship.’