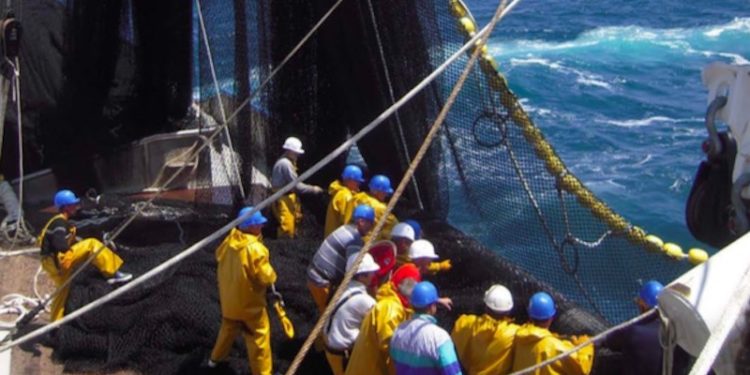 La Réunion fishing company Sapmer has established a presence in mainland France with its first retail outlet there, offering 100% natural and sustainable seafood products direct from the producer to the consumer, and there are good reasons for setting up Les Comptoirs Sapmer in Concarneau.

‘We are driven, more than ever, by a pioneering spirit and a determination to anticipate changes in our sector,’ said Sapmer director Adrien de Chomereau at the opening of Les Comptoirs Sapmer.

‘Proud of our roots and our expertise, we wish to pay tribute to the talent of the men and women who go out to sea to fish for these outstanding products, while maintaining respect for the resources and the environment.’

It’s no coincidence that Sapmer chose Concarneau as the ideal place for its first retail outlet in France, and the company has strong links with this port that is also France’s tuna capital.

‘Even if Sapmer is a French company based 10,000 kilometres away in La Réunion, there is a strong bond with Brittany that goes back to the beginning of the venture more than seventy years ago. A large part of the crew of the first ship in 1947 came from here. It is also in Concarneau that most of our boats were designed, and where most of our partners and suppliers are located,’ he said, adding that Sapmer has established Les Comptoirs and has also set up offices in Concarneau to reinforce its presence and links with Brittany.

Sapmer’s links with the region include the 350 of its fleet’s French crew members, most of whom are from Concarneau – and two new additions to the team are the staff of Les Comptoirs Sapmer, Cécile Hannot and Stéphanie Wioland, working closely with the company’s European sales manager.

‘This is an initiative allowing us to offer our tuna and southern products direct to end consumers at a fair market price, while guaranteeing the quality throughout. We decided to place these products under our banner by creating the Les Comptoirs Sapmer brand,’ Adrien de Chomereau said.

The innovative fine fish shop concept developed by Sapmer is primarily an opportunity to share its culinary expertise with the consumer. Les Comptoirs Sapmer is a local business, with a 10 square metres of sales and storage, where professional chefs and seafood aficionados are able to purchase a range of exceptional products tat are sourced directly from Sapmer vessels.

Customers will also be able to participate in culinary events offered throughout the year by Les Comptoirs Sapmer; preparation workshops, chef demonstrations, product tasting sessions and even cookery seminars.

Sapmer is a pioneer of fisheries in the Southern Ocean and was established in La Réunion in 1947. It operates fshing vessels in the Indian Ocean and in French Southern Ocean territorial waters. Its fleet of fifteen vessels fish for ahi tuna, skipjack, toothfish and southern rock lobster and many other species with exotic names that are highly valued for La Réunion’s varied cuisine, such as mahi mahi, wahoo, butterfish, St Paul’s fingerfin, yellowtail, scorpion fish, wreck fish, striped trumpeter. Production is available to local markets as well as which Sapmer has export customers in thirty countries worldwide.

Sapmer vessels fish for toothfish, which is subject to strict quotas and management, and is MSC-certified. The fleet fishing around the Kerguelen and Crozet is monitored constantly and there is 100% observer coverage. The company also has a limited southern rock lobster quota, and Adrien de Chomereau said that Sapmer is working towards rational exploitation of tropical tuna species In the Indian Ocean, which saw the introduction of quotas for ahi tuna in 2017. Independent observers are present on board each of its vessels for every fishing trip.

He added that the company has committed itself to sustainable fishing and also sets an example on social issues, having invested in fishing vessels that are safe and comfortable, while minimising environmental impacts.