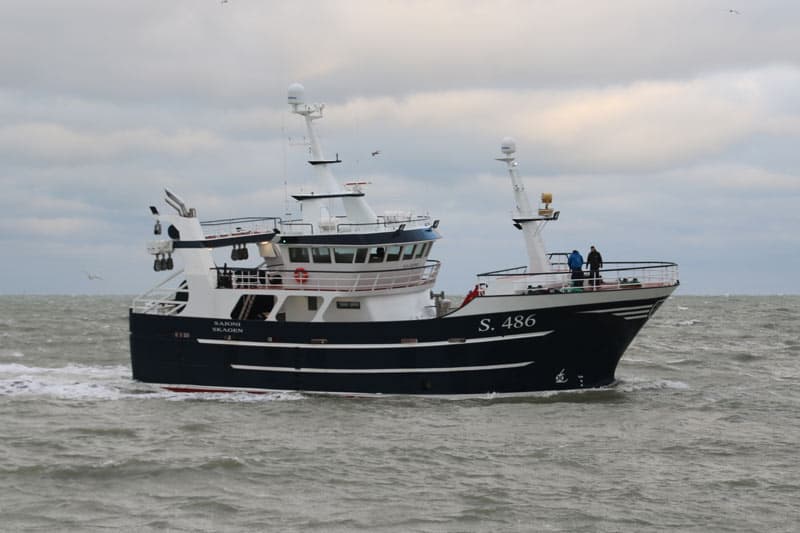 New shrimper Sajoni was christened at the Skagen quayside at the end of last year, and in proper Danish style, built for Henrik Terpet and Brian Sørensen to fish for shrimp and freeze on board. It replaces their older vessel that has served them well for the last five years.

The new Vestværft-built Sajoni S-486 replaces Casilo, giving them and the crew some extra space and comfort in the new trawler’s extra four metres in length and 1.40 metres extra beam, as well as more hold capacity than the old boat that has served them well.

Sajoni is operated with a crew of twelve in total, spilt across a two-weeks-on/two-weeks-off roster that gives everyone a decent amount of time off.

The new trawler measures 28 metres overall with an 8.40 metre beam, and according to Henrik Terpet, the real advantage of the new boat is that catches can be handled within an hour, which boosts quality and put their shrimps into a better price bracket. Around 30% of the catch is cooked on board, while 70% is smaller grades and a small amount of by-catch, and landings take place in the Danish ports of Hanstholm, Hirtshals or Skagen, or at Smögen in Sweden.

The catch handling deck on board was fitted out by InTech with lines for quick processing of both shrimps and fish, while the ice machine and the refrigeration and chiller systems were supplied by Lemvig Maskin og Køleteknik

Sajoni has a 746kW, 12-cylinder Cummins QSK 38 main engine, driving a 2780mm diameter Heimdal k600 propeller inside a nozzle via a Heimdal HG 5116 gearbox with a 11.6 reduction ratio and fitted with two PTOs. Additional power is sourced from the two 141kVa Cummins QSK 7 auxiliary engines.

AS Scan in Hvide Sande supplied the MT1600 steering gear and the bow thruster is a 160hp SFT4 unit from Hundested.

The entire hydraulics package for the new shrimper was supplied by Thyborøn Skibs & Motor, with three 18-tonne main trawl winches managed by a Thyborøn trawl computer. The fishing gear is handled using a man double net drum and a single drum, and the package also includes gilsons, a mooring winch, two helper winches and a powered tracking system for adjusting the trawl blocks, as well as a TMP900 deck crane.

Sajoni fishes with a pair of Thyborøn trawl doors and roller clump, and there are three 2100 mesh shrimp trawl on board, supplied by Selstad Nordtrawl in Skagen.

Brian Sørensen and Henrik Terpet went to JRC specialist Navteam for Sajoni’s electronics, and this is the third time been to the same supplier to have a fishing vessel fitted out.

The Navteam installation includes JRCs new MFD JMR-9200 (Multi Function Display Radar with built-in ECDIS set, as well as the new fourth generation power log JLN-652BB that shows the ocean currents direction and speed in 50 layers below the ship. This provides them with clear indications off seabed current direction and strength while they are fishing.

According to Henrik Terpet, they are very satisfied with the new trawler and it has performed beyond their expectations. He commented that there have been the usual minor adjustments that need to be made, but the yard has done a great job over the three years since Sajoni started life as lines on a piece of paper.