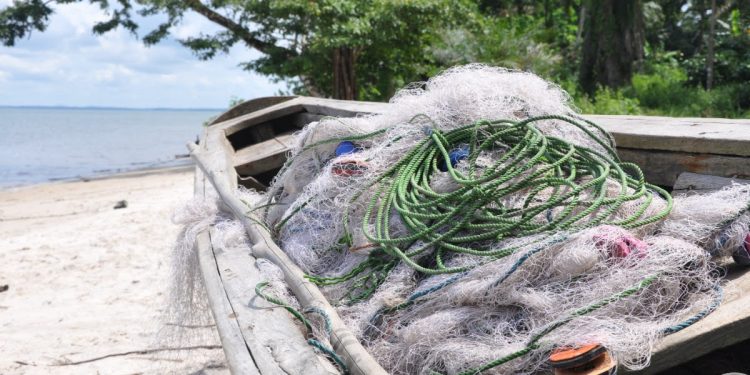 Coastal communities will collect discarded nets which will be sent to make a variety of goods, such as sports and kitchen equipment.

The generous funding from the Norwegian Retailers’ Environment Fund will allow EJF to employ a project co-ordinator who will engage with communities, discussing with them the dangers of ghost nets, and how they would like the scheme to work in their area. The co-ordinator will also provide training for the fishers on how to avoid losing nets themselves.

The initial funding will allow the project to run for the first year, and the team is hoping to get ten communities on board. The work, which commences on 1st August, builds on a successful pilot project in which three fishing villages were able to collect over a tonne of nets in the course of a year.

‘Ghost fishing poses an enormous threat to marine life and the ecosystem in our oceans. Fishing gear is made of plastic, killing fish and other marine lives for decades before eventually being degraded into microplastic. It is highly important that lost nets, pots and other fishing gear are cleaned up from our ocean, and we have high confidence that EJF will contribute significantly to do exactly that,’ said Norwegian Retailers’ Environment Fund CEO Rasmus Hansson.

The process itself is as low impact as possible. Once the nets are collected they are cleaned using salt water, compressed into blocks, and transported to the partner recycling factory. Here, they are made into pellets and sold to end-user companies which make them into useful products.

EJF has lined up two such companies that will be the first to form part of this circular economy. Qualy is a Thai design brand with a focus on community and environment, which has already used the nets to produce a keychain attachment to help people minimise touching surfaces during the coronavirus crisis and visors to prevent infection. Starboard is a water sports company that makes windsurf and paddleboards, among other sports equipment. They will contribute fishing nets they find through their Plastic Offset Program – a project that regularly cleans up beaches in Thailand.

The proceeds will either be paid into a fund for the village, to be used towards projects such as communal facilities or conservation projects designed to help communities adapt to climate change or given to individuals as they present the nets for recycling. Each community will be consulted on which model they would like to follow.

The project will be implemented with the support of the Thai Department of Fisheries, which has already been invaluable in the pilot work, facilitating collaboration with the three participating communities.

Once the project is successfully running in Thailand, EJF hopes to expand it to other countries, and in particular West Africa, where marine plastics pollution is rife.