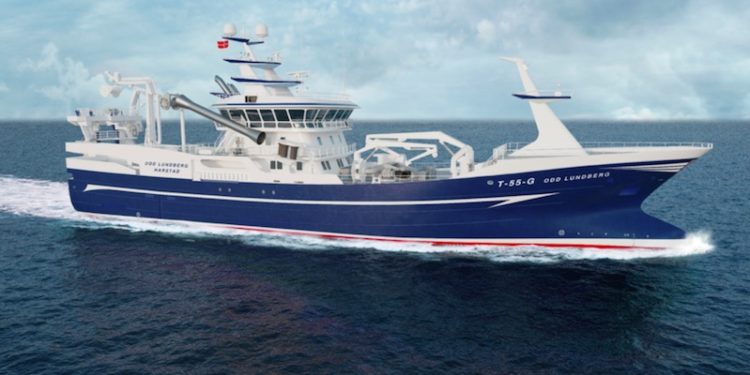 The third generation of Norwegian fishing company Odd Lundberg AS have selected deck machinery from Rapp Marine for their new vessel.

‘This is the first time the company has selected a high-tech electrical system,’ confirmed a delighted Morten Stenkjær, at Rapp Marine AS.

‘The new vessel is a combined purse seiner and pelagic trawler, and will be equipped with a complete electric deck machinery installation from Rapp Marine. The new building will be optimised for the company’s operation.’

Mats Lundberg, who sails as skipper with his younger brother Stian as chief engineer, are the fourth generation of fishermen in the family-owned fishing company Odd Lundberg AS, which has a history dating back to 1918.

According to the Lundberg brothers, the feedback from their colleagues who have experience with other types of fishing vessels with electric winches is that they are smoother in operation and fish better.

‘Whether this effect is quantifiable will become apparent when the vessel is operating, but anyway it is an arrow pointing in the right direction, towards the future,’ said Mats Lundberg.

‘In selecting equipment, we felt that Rapp Marine was the supplier that satisfied our requirements and had the most innovative solutions. It can also be said of previous deliveries that Rapp Marine has always been the one who has met our demands at a reasonable price.’

He confirmed that the electrical equipment has lower power requirements, and is more efficient as the conversion to hydraulics has been eliminated.

‘We hope this will be reflected in lower fuel consumption and a reduction in emissions of harmful gases. With electric winches we will have better utilisation of the energy, as we have re-generation of energy during the shooting/towing phases when fishing. This re-generated energy is returned back into the ship’s electrical distribution system and so reduces the load on the main engine,’ Mats Lundberg said.

‘It’s also reassuring to know that Rapp Marine is continuously working to improve service to its customers. In our industry, we would rather have help yesterday when a problem arises. Therefore, the 24-hour service phone is very important to us.’

‘We are very grateful that Odd Lundberg AS has chosen Rapp Marine as their third generation supplier, and in particular because they chose our electrical system as a solution for the future,’ Rapp Marine’s Morten Stenkjær said.

‘The latest technology will be used on all the equipment delivered from us on board this modern vessel built at Karstensen Shipyard in Skagen. Rapp Marine is pleased with the trust Karstensen Shipyard has once again placed with us. Both Rapp Marine and Odd Lundberg AS have collaborated with the shipyard for many years and now we are looking forward to new co-operation with this new flagship.’