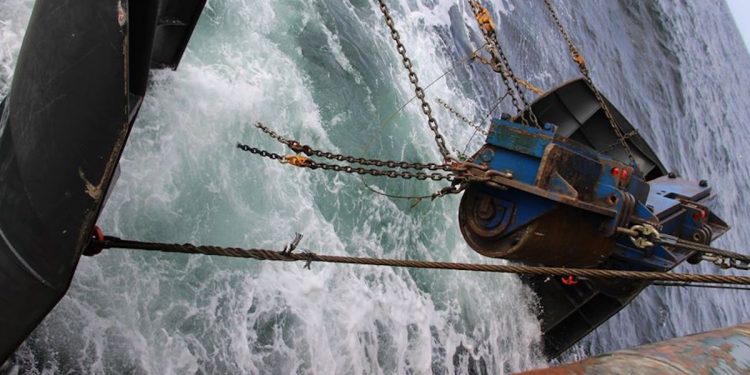 Vónin has seen quite some growth in the Barents Sea fleet that trusts its shrimp gear to deliver the right results.

While the company has a long-established reputation for shrimp gear that has been standard for the Faroese, Greenlandic and much of the Canadian fleet, fishing companies in Norway, Iceland and Russia have increasingly been coming to Vónin for trawls for the Barents Sea shrimp fishery, and now the greater part of these trawlers are using shrimp gear from Vónin.

According to Vónin’s Óli Horn, there’s no coincidence at work here, as the choice comes down to fishing gear that returns results – and Vónin has a very long background in producing and developing shrimp trawls.

Producing complete packages is a significant part of the workload, providing the entire setup that includes ground gear, codends and the mandatory selectivity grids. Óli Horn commented that the company’s long experience of working with grids is one of the key reasons why customers come to them.

‘We have been doing this for a long time and it’s vital to get the grid right. Getting the right grid is something that can make a big difference to a trawler’s catch rate,’ he said.

The Storm trawl doors that Vónin developed and produces have become an integral part of the package as these doors are performing well, from the 16 square metre doors Granit uses to square its triple-rig gear all the way down to the 3 square metre and smaller doors at the other end of the scale.

Vónin has also developed its own roller clumps to complete the picture.

‘The key points are the design, the material and the workmanship that all go into these trawl gears,’ he said, adding that the design process brings together extensive experience with computer-aided techniques that make it possible to identify tensions and hot-spots, which means that potential weaknesses can be eliminated ahead of flume tank testing and long before a full-scale prototype goes into the water.

‘Using correct high-quality materials from handpicked suppliers makes a big difference,’ he said. Among these materials is the Fortis netting, which is developed for Vónin. Fortis netting combines strength and lightness, and this pays dividends.

‘It’s noticeable that those who are using this lightweight netting tend to fish better,’ Óli Horn said.

A further factor is Vónin’s production values in sticking to working practices that lead to lower maintenance, which means more time to fish.

‘Our high standard of workmanship pays off in minimising maintenance for the deck crew, giving you more time to fish and prolonging the working life of each trawl we supply,’ he said.