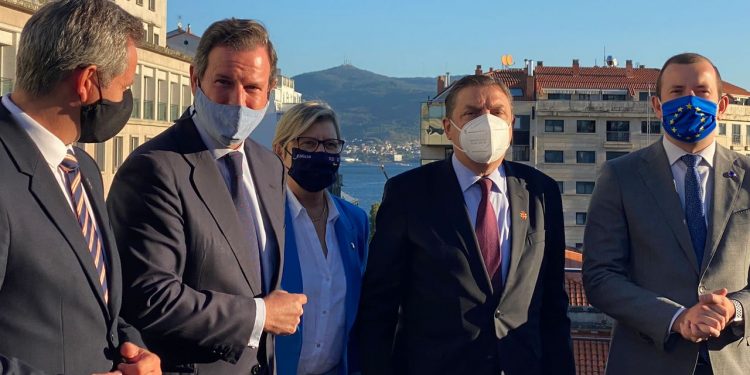 The Spanish Fisheries Confederation (Cepesca) has expressed its appreciation to Commissioner Virginijus Sinkevicius for a visit to Spain that started in Vigo before heading to Murcia and Alicante to learn about first hand the reality of Spanish fishing.

Cepesca has long wanted European institutions, especially the European Commission, to pay attention to the fishing sector in order to adapt fishing policy to the real needs of Spanish and European fisheries.

During the meeting that the commissioner has held in Vigo with the Ministry of Agriculture, Fisheries and Food (MAPA) and minister Luis Planas, as well as the Xunta, the Spanish Institute of Oceanography, the European Parliament and industry bodies, Cepesca secretary general Javier Garat recognised the work carried out by the Commissioner’s team in responding to the Covid-19 pandemic, plus the work carried out during the Brexit negotiations and the crisis with Norway.

But he has stated that it is vital to dedicate more time and attention to a key sector that provided healthy food.

Javier Garat also reminded the Commissioner of the industry’s frustration in the face of mistrust generated by certain European Commission policies and the lack of recognition of the remarkable effort made in the last decade.

‘This has meant losses in terms of vessels, jobs and wealth in our fishing regions, alongside reductions in fish mortality and fishing effort, which has allowed most of the fish stocks in the North-east Atlantic to meet MSY,’ he said.

He commented that significant distrust has been generated by policies such as the European Green Pact, the Biodiversity Strategy and the recent proposal for a directive that aims to tax fishing diesel, warning about the negative impact and enormous cost that it will entail for fishing activity.

‘It will cause the loss of competitiveness of our companies compared to those of other countries such as China, which will continue to operate under much more lax legislation than in Europe. Aside from the legal situation, many of its products are shipped duty-free to the EU,’ he said.

Javier Garat criticised the introduction of measures that he described as treating fishermen like criminals, and reiterated the sustainability of a fishing gear such as trawling , which has been unjustly demonised and has become the subject of persecution under EC policies.

He went on to request that Virginijus Sinkevicius act on his promises and support the fishing sector, specifically mentioning the United Nations Summit on Food Systems 2021 as an opportunity to recognise fishery products as healthy food and with a lower carbon footprint impact – thus deserving of policies that, instead of allowing unfair competition, serve to promote the food sovereignty of the European Union.

Javier Garat has also emphasised the key issue of international ocean governance and the EU’s fisheries agreements with third countries, asking the Commissioner for greater drive and support for RFMO and a greater coherence and co-ordination between fisheries policy and the commercial, health and co-operation policies for the development of the EU.

Concerning fishing agreements, Javier Garat has drawn attention to the agreement with Mauritania which, after its renewal last July, urgently needs to be dealt with so that its provisional application can come into force so that vessels do not have to leave the fishing ground as of 15th November.

He reiterated that European fishing vessels comply with legislation that is at a level far above that of other countries, even though the fleets of those do not encounter obstacles to marketing their products in Europe, often tariff-free.

PrevForrige nyhed‘If we want to be sustainable, there is no way around this’
Næste nyhedNew catch handling deck for FrostiNext