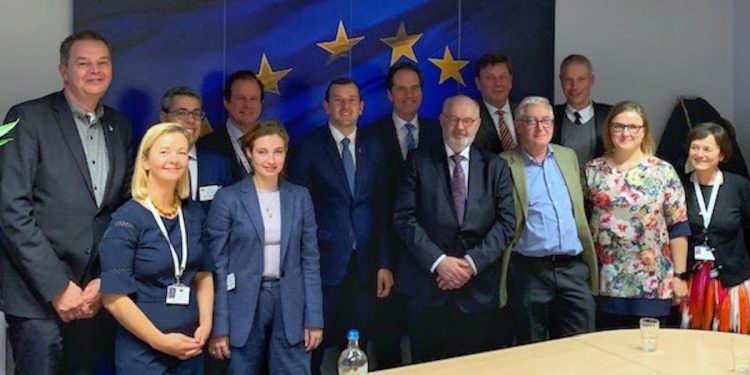 In a first formal meeting with the European fishing industry, represented by Europêche, new Commissioner for Environment, Oceans and Fisheries Virginijus Sinkevičius acknowledged the significant efforts made in the North East Atlantic by the EU industry that led to the recovery of fish stocks – but said that there is still room for improvement.

The new Commissioner promised not to single out any of the pillars of sustainability (social, economic and environmental) during his mandate, without losing sight of the goal to achieve Maximum Stainable Yield (MSY) levels.

The newly elected Commissioner listened and exchanged views with fishing industry leaders on the challenges faced by the sector and on ongoing fisheries policy developments. Europêche assessed the talks with the Commissioner, who is committed to seek balance between the three dimensions of sustainability during his mandate, as open and constructive.

‘I am very pleased that Commissioner Sinkevičius is actively engaging with the fishing sector and has shown a great willingness to continue collaborating in the future,’ said Europêche managing director Daniel Voces, who welcomed the constructive nature of the meeting.

‘An open dialogue is paramount in designing workable policies and rules,’ he said, while warning that 2020 will be a crucial year since all international treaties, such as the Convention on Biological Diversity (CBD), will set new ambitious goals for sustainable ocean governance for the next decade and the industry needs to procure a seat at the negotiating table. In addition, Brexit negotiations on the future relationship with the UK will take shape in 2020.

With the upcoming Council of Fisheries Ministers at which TACs and quotas will be decided for 2020, Europêche requested the European Commission take into account the socio-economic impact reports submitted by Member States to mitigate, where possible, hefty cuts and to fully use the different ranges of quota scenarios offered by scientists to achieve the MSY objective.

Europêche reminded the Commissioner that there are a lot of people making a living out of fishing and huge catch reductions are simply untenable.

Commissioner Sinkevičius committed to move fast on the negotiations to deliver a new European Maritime and Fisheries Fund 2021-2027 in the shortest timeframe possible to facilitate a smooth transition to the next budgetary period. On a related note, he also promised to move as quickly as possible to solve the crisis in the Baltic, due to extreme quota reductions, by providing financial assistance to fishermen looking to leave the industry, through workable scrapping schemes.

Concerning Brexit, Virginijus Sinkevičius reassured industry representatives by stating that the European Commission is ready and prepared entirely for every possible scenario. In addition, he ensured that fishing will not be singled out from any political package agreement with the UK.  He confirmed that negotiations on fisheries will be inextricably linked to trade and market access.

The new Commissioner for Fisheries aims to focus part of his mandate on the implementation of the current Common Fisheries Policy and to address issues not sufficiently covered in the current policy such as climate change and social affairs. He emphasised that if the EU wants to be influential worldwide, it needs to be credible in its policies.

In the context of the EU Green Deal, Europêche reminded the Commissioner that consuming wild-caught fish means climate protection, since this is by far the animal protein with the lowest carbon footprint and thus the best option in terms of food security. As a low impact food producer, Europêche called on the Commission to prioritise the fishing sector as a key user of the marine space.

As part of his environmental portfolio, the Commission intends to extend and intensify the coverage of Marine Protected Areas (MPAs). Focus will be put on the effective implementation of the policy, protecting vulnerable areas, while allowing fishing activities where possible.

Europêche agrees that MPAs, as management tools, should be based on scientific recommendations. It is not about setting percentual objectives as a goal in itself. Furthermore, the level of MPA-coverage should be considered at European level and not individually by Member States.

Europêche fully endorsed the new Commission ‘Farm to Fork Strategy,’ which applied to the fishing industry would be a ‘Sea to Plate’ strategy.

The sector proposed to implement this approach by means of enhancing traceability on imports in the EU market, expanding information to consumers about processed seafood products and their origin and eliminating commercial preferences for fish coming from countries connected to illegal fishing and serious labour abuse.

Europêche requested that the Commission implement a publicity drive highlighting the benefits of fish consumption – not only for citizens but also for the health of the planet.