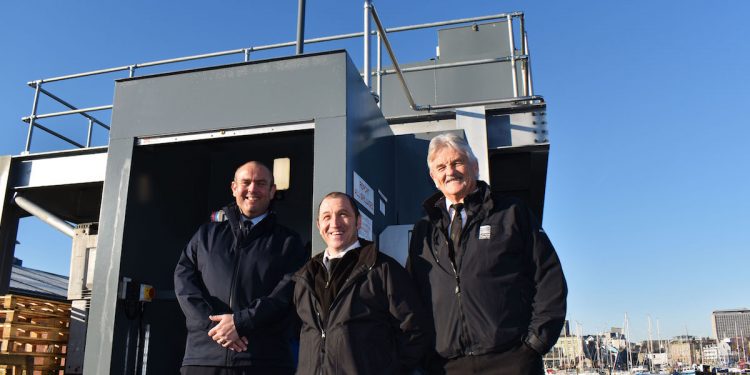 Fishermen can benefit from a £750,000 new fuel and utility services depot created at Plymouth Fisheries to help refuel their vessels more quickly.

Sutton Harbour Group, which owns and operates Plymouth Fisheries, has made a £750,000 investment in the fish market complex based in Sutton Harbour to upgrade and renew the existing fuel facilities and to create new metered water and electricity self-service dispensers. The investment was part-funded by a £375,000 grant from the European Maritime and Fisheries Fund (EMFF) administered by the Marine Management Organisation (MMO).

Work on the new fuel storage and delivery facilities was completed at the end of last year and the new quayside distribution points are now operational for fuel, water and electricity services, which will increase the efficiency of fishing vessels using the complex, which houses the second largest fresh fish market in England.

In addition to a new fuel tanks and pipelines, the quayside distribution points feature modern dispensers supplying metered water and electricity with these utilities charged at cost, in line with other commercial UK ports.

‘These improvements, which include an additional distribution point, will allow for shorter waiting times for boats between their landing a catch at Plymouth Fisheries and being able to get back out to sea again,’ sid Nick Eggar, Manager of Plymouth Fisheries.

‘More modern fuel, water and electricity dispensers will be easier to use and continue the ongoing modernisation of Plymouth Fisheries, helping us to remain as the best place to land and sell a catch in the region.’

The improvements follow a series of investments in Plymouth Fisheries made by Sutton Harbour Group over the last five years. In 2015, Plymouth Fisheries unveiled a new ice production facility, part of a £1.2million investment in the chill chain facilities which was match-funded by a £470,000 grant from the European Fisheries Fund (EFF), also administered by the MMO, enabling production of ice on site 24 hours a day so trawlers could load it directly into their vessels.

‘Plymouth Fisheries is the last major fishing port to introduce utilities charges for vessels using the harbour, bringing Plymouth into line with other ports in the country, and we are introducing pre-paid water and electricity points, which are situated at convenient points along the quays.’

He commented that the ever-increasing costs of providing the infrastructure and services required by today’s modern fishing fleet, and the variation in size and requirements of the fleet, mean a ‘user pays’ principle is considered the fairest way to apportion costs for power.

‘Modern technology has made this possible and through a pre-payment system, we can now offer the fishing fleet 24 hour access to water and electricity, alongside improved fuel delivery services.’