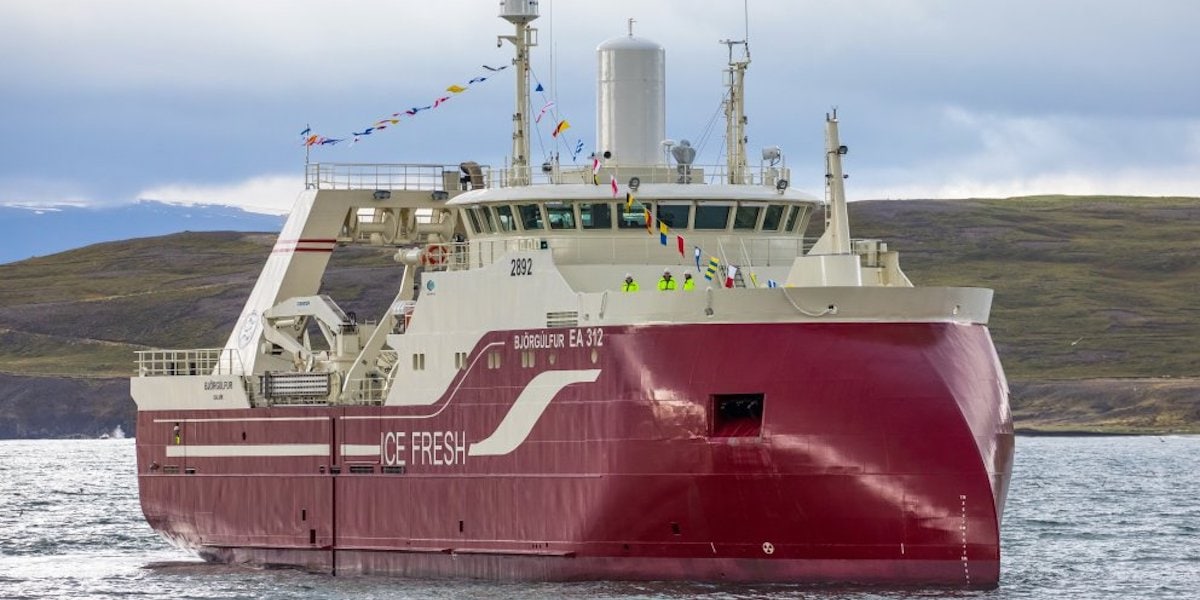 The 58.47 metre Björgúlfur is one of a series of vessels built for Samherji companies, due to be fitted with a Slippurinn catch handling deck and KAPP’s Optim-ICE liquid ice system. Image: Samherji

A contract was signed at the European Seafood Exposition in Brussels this week with the Slippurinn shipyard in Akureyri and KAPP ehf for catch chilling systems to be fitted to seven fishing vessels operated by Samherji companies in Iceland.

KAPP’s Optim-ICE systems have been in widespread use for more than last twenty years both on board fishing vessels and in shore-based production plants. The liquid ice produced by the Optim-ICE system envelops and surrounds the fish, keeping the catch at a steady 0°C for as long as the trip lasts, and beyond as the fish is landed and shipped to its final destination with the cold chain maintained.

The seven trawlers are Björgúlfur and Björg, which are operated by Samherji, and Kaldbakur and Harðbakur, run by its subsidiary Útgerarfélag Akureyringa. The new Vestmannaey and Bergey, currently under construction in Norway for Bergur-Huginn, will have the same systems, as will the newbuild ordered for Samherji’s Norwegian company Nergård Havfiske.
Slippurinn is providing the full catch handling decks for these seven trawlers, while KAPP will manufacture and install the liquid ice systems for the whole group.
According to Ólafur Ormsson at Slippurinn and Freyr Friðriksson at KAPP, the focus with these new catch handling decks is to come up with streamlined, effective systems that ensure better and more secure handling of catches, along with minimal maintenance requirements.