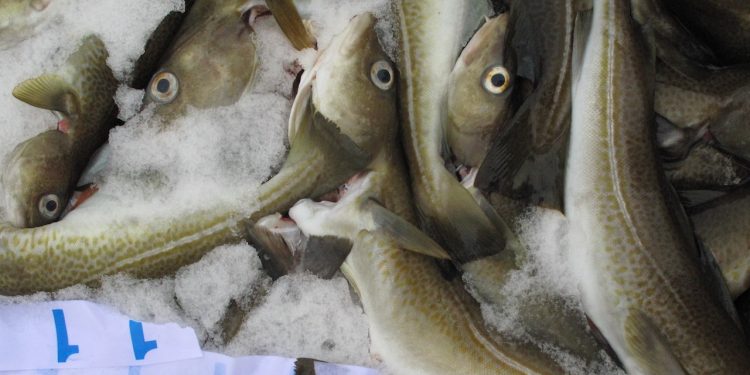 With North Sea cod believed to be in poor condition, advice from ICES is to reduce next year’s quota by 70%, with added quota reductions for other demersal species.

ICES advice for North Sea cod, haddock, saithe, whiting and plaice has been made available, with cod seen as the species most in need of regeneration.
A year ago ICES advised a 50% reduction in the cod quota, although the figure decided on represented a smaller decrease. A 10,457 tonne quota has been advised for next year, with poor recruitment seen as the primary cause of the cod stock’s weakness.
According to the Norwegian Marine Research Institute, the initial indicator is that high sea temperatures during the spawning period is a key reason for this low recruitment.
The saithe stock is above critical levels, but ICES still advises a 15% reduction to 88,093 tonnes, while the haddock stock in a healthy condition – but with higher than expected mortality rates, an 11% cut to 30,228 tonnes is advised. The whiting stock is in a similar condition and a 13% reduction to 22,082 tonnes is advised.
A plaice quota of 131,439 tonnes has been advised, 8% down on last year’s advice.
‘Disappointment is almost inadequate as a term to describe the news that once again the iconic North Sea cod stock is in trouble. After a decade and a half in which the stock has been slowly but steadily increasing, the biomass is again in steep decline,’ commented a spokesman for the UK NFFO.
‘As usual, there is a mix of environmental and fisheries effects at work. ICES points to low recruitment but also suggests that unidentified changes in fishing patterns are implicated. The suspicion must be that the destabilising effect of the EU landing obligation is one of the factors at work. North Sea cod was brought under the landing obligation in 2018. Climate change and some kind of environmental regime shift is identified as a possible factor behind poor recruitment.’

The NFFO points out that cod in the North Sea is not a targeted species but is caught as a valuable by-catch along with other species in a mixed demersal fishery – which makes managing a reduction in fishing pressure on cod a difficult and challenging prospect, particularly in the context of the landing obligation and the potential for cod to choke other demersal fisheries.
‘As vessels are no longer permitted to discard, chokes occur when the exhaustion of quota for one species precludes the vessel, group, or member state, from catching the quotas of its main economic species. The concern now is that cod quota will be out of alignment with the TACs for haddock, whiting, saithe, and plaice, increasing the risk of chokes dramatically in 2020. Because of its body size and shape, cod is not an easy species to separate out without losing other valuable species in the catch. So more selective fishing gear is hard to achieve for both technical and economic reasons.’
The point is also made that in the past, drastic management measures have generated pressures leading to fleet displacements into adjacent areas, or into changing target species, or gear types. All such displacement effects have potential knock-on effects.
‘In navigating their way through to a solution, fisheries managers and the fishing industry will have to take account of adverse scientific advice, the consequences of the EU landing obligation, cod as a by-catch in several fisheries, self-inflicted legal constraints – such as the EU MSY timetable and constraints on the use of fishing mortality ranges to set TACS – the economic viability of fishing businesses and communities, and the volatile political and jurisdictional context,’ the NFFO’s spokesman commented.
‘Above all, experience suggests that fisheries managers working with the fishing industry, will have to try to understand and anticipate the impact of proposed solutions in the real world.’