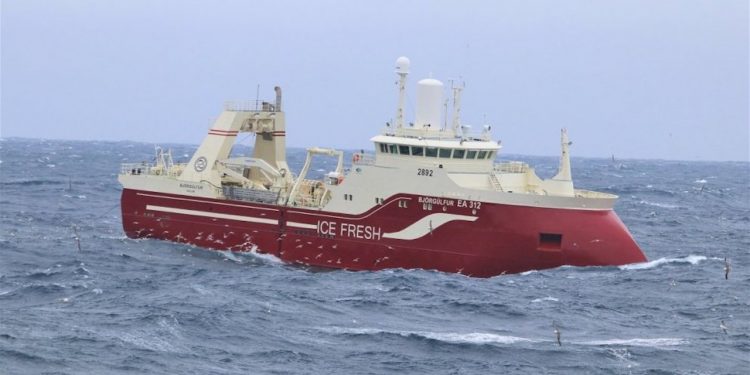 Despite the constant bouts of heavy weather that have been a feature of fishing in Icelandic waters for the first two months of his year, the Samherji production plants have not lost a single day’s work since production began on 3rd January.

According to skipper Pálmi Gauti Hjörleifsson of the company’s trawler Björgúlfur EA-312, the highly adverse weather conditions through January and February have dictated catch rates. He said that this winter the depressions passing over Iceland this winter have been unusually deep, and often there’s no option but to stop fishing and dodge through them.

‘There have been storms on all grounds. The weather quite simply dictates what we can fish and where we can work. Björgúlfur is a large and powerful vessel, which has been a huge benefit this winter,’ he said.

‘Having a reliable vessel makes all the difference when we just have to sit it out. These new, large trawlers are very different from the vessels they replaced, and I consider that safety and conditions have been significantly increased with these investments. This is an aspect of the debate around fisheries that doesn’t get enough attention.’

He commented that the trip just completed is largely typical, starting on northern grounds before heading east for some better weather.

‘Ahead of a trip, the first thing we check and weigh up is the forecast. The situation is that we choose fishing grounds based on the weather forecast,’ he said.

The two processing plants in Akureyri and Dalvík need between 140 and 200 tonnes of raw material each day, supplied by the five trawlers operated by Samherji and ÚA, with trips managed to fit the plants’ requirements. Production has been maintained every weekday since 3rd January, right up to a two-day shutdown in early March timed to coincide with school holidays.

Production manager Sólveig Sigurjónsdóttir at the ÚA factory in Akureyri said that it’s important that production doesn’t get held up due to a shortage of raw material.

‘It’s important, both for the staff and also for the customers who have ordered some time ahead products to be supplied at a particular time. Fishing, production and sales are all co-ordinated,’ she said.

‘All the staff ashore are of course aware that storms cause problems in fishing, but fortunately we have been able to maintain constant production every day this year, and that’s quite an achievement.’