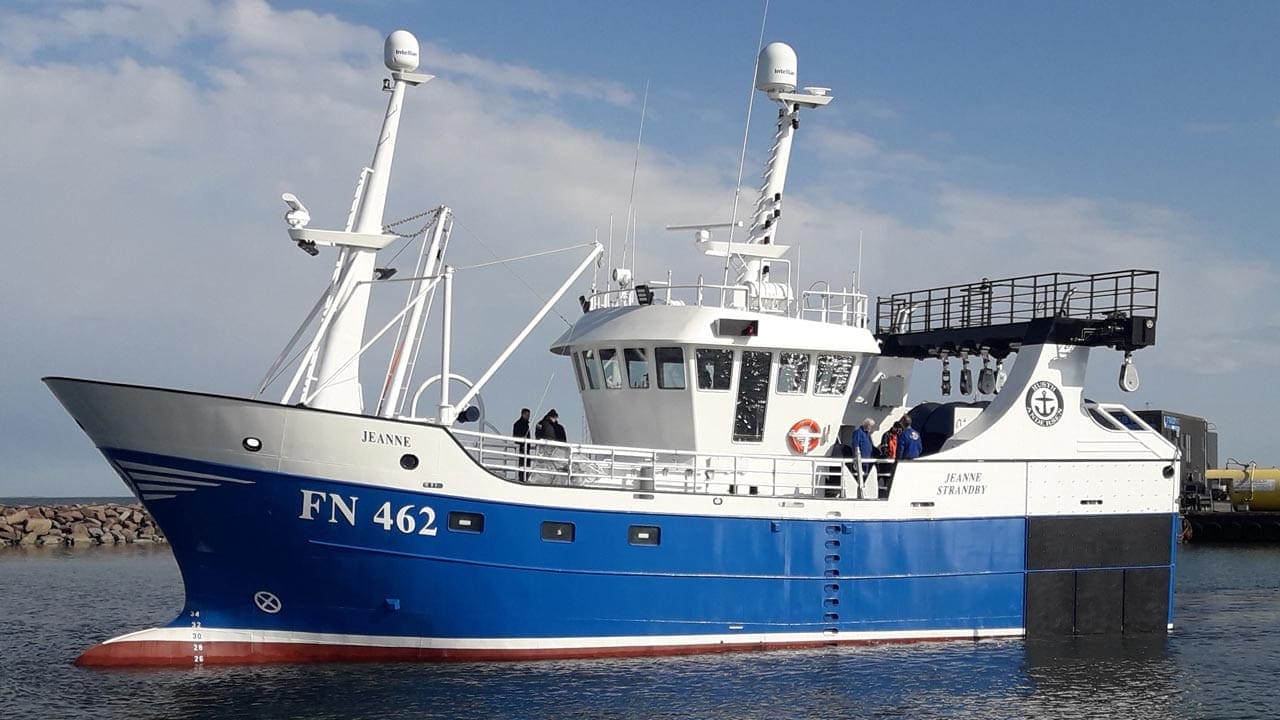 New Strandby trawler Jeanne is the result of a collaboration between consultancy ShipCon, the Jobi Værft shipyard and the new boat’s owners

Jobi Værft in Strandby delivered the new Jeanne FN-462, the latest Danish trawler built to work on langoustine and whitefish on the North Sea, Skagerrak and Kattegat.

Jeanne is owned by Jeanne Strandby Aps, which is in turn owned by skipper Peter Vadsager Husth and Svend-Erik Andersen, chairman of the Danish Fishermen’s Association – and his daughter Jeanne sent the new trawler on its way at the christening in Strandby.
Expected to be fishing around 340 days a year and alternating two crews of six on a week on/week off basis, Jeanne will be concentrating primarily on langoustine and some whitefish.

The 23.97 metre Jeanne has a 7.60 metre beam, and replaces a Swedish trawler built in 1988 that Svend-Erik Andersen and Peter Husth acquired in 2009.
Compared to the old boat, the fully shelterdecked new Jeanne has slightly more engine power and a larger diameter propeller at 2500mm. Coupled with a nozzle and a good reduction, this provides Jeanne with a better bollard pull than the old trawler was able to achieve. The modern Caterpillar main engine and auxiliaries are expected to ensure efficient operation with lower emissions.
According to Peter Husth, everything is better with the new trawler – including a new semi-automatic langoustine handling system which streamlines the whole catch handling process, which has been ergonomically designed to eliminate heavy lifting and poor working practices.
He said that working conditions for the crew have improved, and alongside this the better handling and facilities also result in a better product – which is expected to be reflected in the boat’s bottom line.
Jeanne has a fishroom with space for 750 boxes, as well as freezing capacity for 550, which roughly doubles the trawler’s capacity compared to the old boat – which Peter Husth said provides greater opportunities as time at sea can be used more effectively.