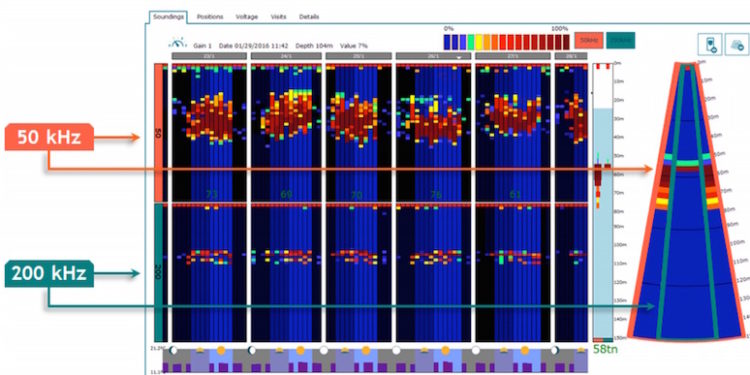 With management of the tuna industry in the Indian Ocean set to become more regulated, Concarneau marine electronics company ISI-Fish has responded with technical innovations that allow skippers more information to differentiate between species.

ISI-Fish specialises in buoys and other equipment for the tuna fleet, supplying French tuna operators fishing in both Atlantic and Indian Ocean regions.

ISI-Fish’s new M3i+ buoys are being supplied to the new Pendruc, the tuna purse seiner for CFTO due to arrive in Concarneau from the Astilleros de Murueta yard in Spain on Saturday. The M3i+ buoys have been developed by ISI-Fish’s Spanish partner company Marine Instruments and are built to operate on two frequencies with simultaneous 50kHz and 200kHz sampling at one minute intervals, with the buoys designed to sample vertically at all times. The buoys can also be configured to sample more intensively each side of dawn and dusk, the times of day when fish tend to aggregate.

‘This new generation of buoy has the double advantage of being able to provide more frequent and more effective sampling, and in particular it is able to differentiate between species and the acoustic returns they deliver when sampled,’ said Gildas Bodilis of ISI -Fish.

‘Species with swim bladders such as bigeye and yellowfin have an acoustic signature that gives the best return at low frequencies of around 50 kHz, while species without bladders, such as skipjack, are best detected in high frequency around 200 kHz. The M3i+ buoy has been specially developed based on information from studies conducted by the Spanish marine research body AZTI. This gives the skipper information allowing him to have a clearer picture of the volumes and species of fish around the buoys, making it possible to operate with an effective catch strategy.’

‘The benefit of this will be shared with the scientific community,’ Gildas Bodilis added. ‘Orthongel, the French organisation representing tropical frozen tuna producers co-operates with the IRD, the French Research Institute for Development, in scientific research programmes on tuna. This is a major issue for the sustainability of our tuna fisheries and we can make progress by combining the efforts of industry, science, government and fishermen,’ he said.