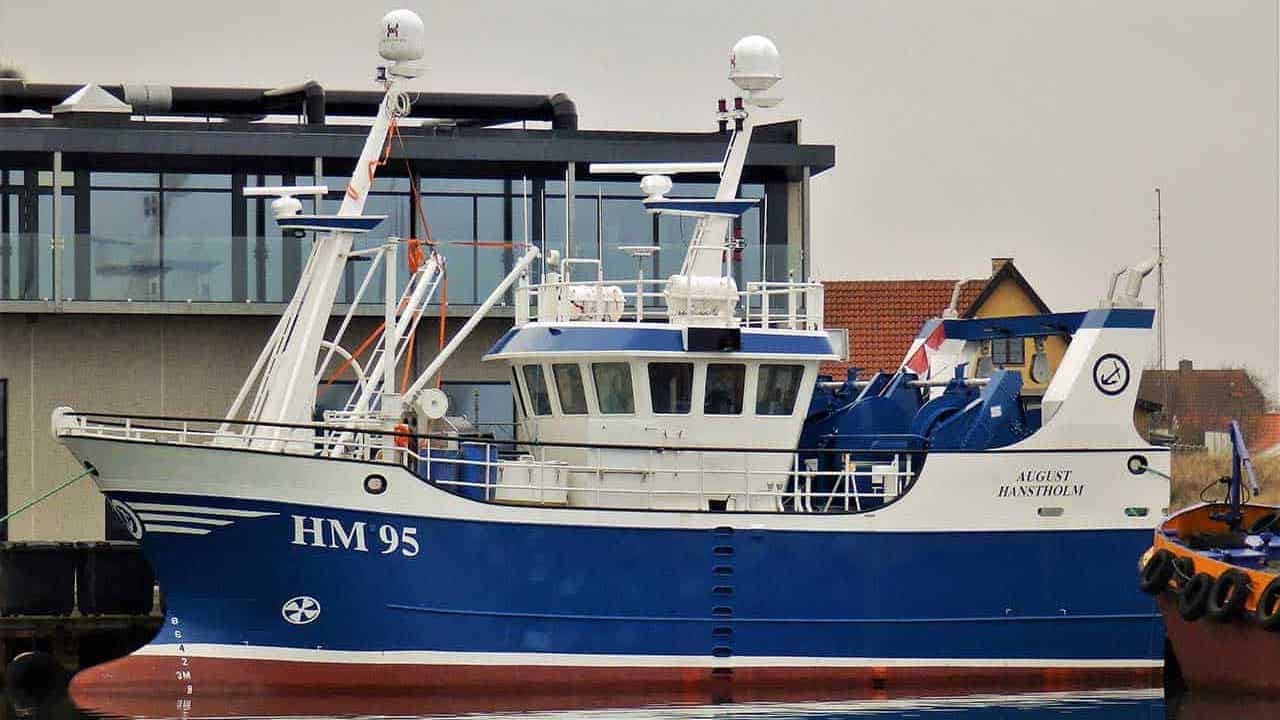 With just the final documentation needing to be completed, Hanstholm brothers Morten and René Olsen are ready for their new August HM-95 to start fishing.

Built at Jobi Værft in Strandby, August replaces their older boat of the same name, which is now tied up in Hanstholm, waiting for a buyer to turn up.

The new August is designed to alternate netting and seine netting to fish for whitefish in the Skagerak and North Sea. The new boat is an improvement all round on what they are used to.

‘We have much more space on the deck and best of all, we have a direct pull on the seine winches.. The working conditions are to the highest standard, and the catch handling system and conveyors make it much easier to handle the fish,’ René Olsen said.

Catches are landed in Hanstholm and with a fishroom capacity of 440 to 4500 boxes, the new August has double the old boat’s capacity.

The crew have significantly more comfortable quarters than before, with more space for the galley and mess areas, and with everything fitted out to Jobi Værft’s usual high standard.

They plan to work with the usual crew of three, and with an extra man on the team as instead of 150 days a year, they can expect to be fishing for between 180 and 200 days. He pointed out that an extra crewman means a more flexible rotation, and the boat’s larger capacity means they can work slightly longer trips.

According to René Olsen, the focus is on optimal catch handling, and a gentler method of fishing – which is why August is rigged for seine netting.

He said that this is a fishing method that meets environmental demands and a fuel consumption of just 1300 litres of diesel for a 30-tonne trip is a positive result and far below the average Danish fishing vessel’s fuel consumption. He added that seine-caught fish also attracts better prices, and he is clear that this gentler approach to fishing is a trend that he expects to see consumers increasingly asking for in future.

The only current headache is the lack of access to Norwegian side of the Skagerrak.

Negotiations are still in progress, complicated by Brexit, as talks take place simultaneously between the EU, Norway and the UK. The protracted lack of the usual agreement means that there is far more fishing pressure than usual on fishing grounds in the Skagerrak where 95% of their fishing takes place.

‘The effects of this fishing density is going to be felt for months to come,’ he said, adding that an additional effect of Brexit is the loss of 25% of Danish quota, which needs to be properly compensated.

The main engine is a Scania DI16 080M. The stern gear is from Hundested, with a CPG38 gearbox with a 6.44:1 reduction and a 1900mm VP10 propeller. Hundested also supplied the FT2V bow thruster. Steering gear is a Scan Steering MT500 setup.

The hydraulics and seine winch installation are from Kynde & Toft, installed by the yard, which also delivered the catch handling setup with a KM Fish Machinery conveyor.

HE Marine Hanstholm supplied August’s wheelhouse electronics, with Koden FX-2 echo sounder, and a pair of Sodena TurboWin plotters. The AP2004 autopilot is from Simrad, but the 2117 and 1513 radars, FA170 AIS, SC-70 GPS compass, GP-39 GPS receiver and the C-188 current log are all from Furuno. Wheelhouse monitors are two 55-inch, two 43-inch and two 24-inch units. The DSC-VHF and VHF sets, and the 5052 AIS-SART are from Sailor and the EPIRB is from McMurdo.