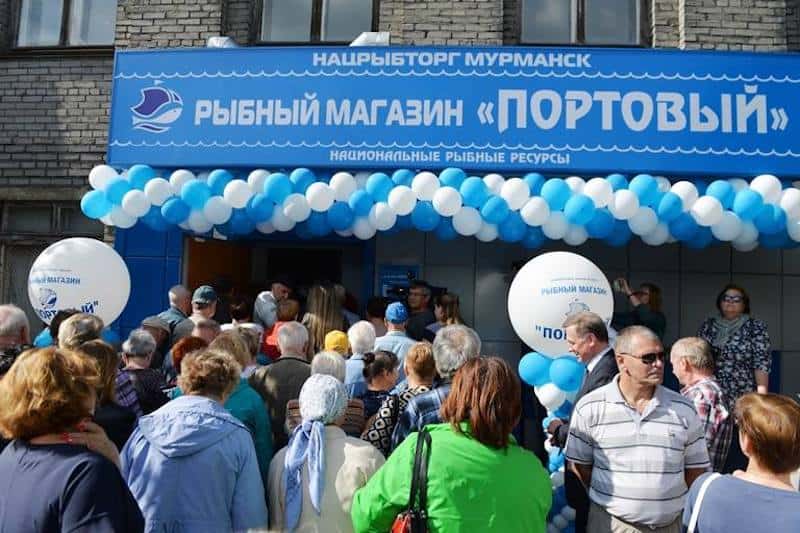 The latest in a series of fish shops designed to carry a range of affordable seafood has opened in the Russian port of Murmansk. These outlets in fishing ports are part of an extensive initiative managed by Natural Resources Agency FGUP Natrbresurs, which operates under the Federal Agency for Fisheries.

Murmansk’s Portovy outlet was opened with a fanfare and follows the opening of a similar outlet in Kalingrad at the end of last year. The principle of the enterprise is to source direct from fishing companies and to sell seafood products to the public with a minimal mark-up, making fish available at 15-20% less than average retail prices. The Natural Resources Agency plans to open more Portivy outlets in the Russian Far East.

The Portivyoutlet attracted crowds during its first day of business.

‘We will be able to keep the range at the stated level, both in price and quality,’ said Irina Stankova, general director of Natrybtorg LLC, which operates the shop.

The opening event in Murmansk was attended by First Deputy Governor of the Murmansk Oblast Alexei Tyukavin, Murmansk Mayor Dmitry Filippov, Chairman of the Union of Fishing Industry of the North Vladimir Grigoriev, and representatives of fishing and processing businesses.

‘This is the first Portovy seafood outlet in the north, launched as part of the affordable fish for the public programme,’ said National Resources Agency general director Sergey Kharkov.

‘The price policy is to be the lowest in the city,’ he said, adding that if the project is successful, the Natural Resources Agency will open more such outlets in Murmanskolov.

‘I am sure that the launch of this venture will have a positive impact on the price tags in other outlets,’ he added.

Conegan – being inventive in packaging

Vladivostok in the lead as Russia’s top fish port