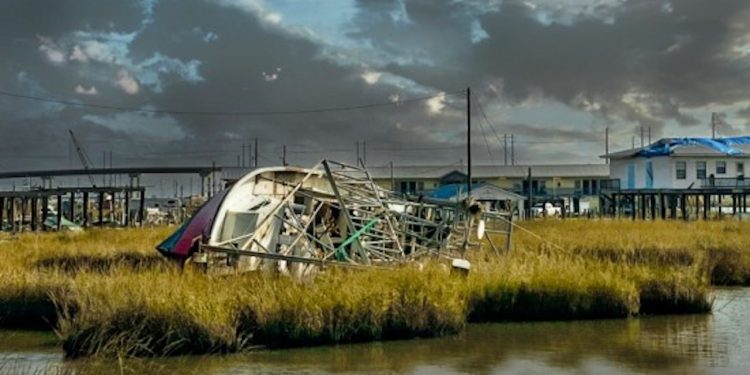 In August 2021 Hurricane Ida blasted ashore along the Louisiana coast, destroying everything in its path.  Infrastructure was hard hit, especially infrastructure vital to Louisiana’s $2.4 billion seafood industry.  Four months later little has changed, and the state’s fishermen, docks, processors, fish houses and restaurants are wondering if it will ever return.

‘At the end of the day the destruction was inconceivable.  In addition to Ida, we are looking at the infrastructure loss from Hurricane’s Laura, Delta and Zeta which ravished the western part of the state last year.’

He commented that the coalition is working to pull together numbers on damage to seafood infrastructure from these storms, as well as revenue, in order to provide a monetary figure needed to bring all fisheries across the state back to strength.

‘This is an important number when we head to Congress to seek the needed funds for the seafood industry,’ he said.

An economic assessment of losses to the state’s seafood industry is in the process of being compiled by Louisiana Sea Grant at LSU, in cooperation with LSU AgCenter and the Louisiana Department of Wildlife and Fisheries.

‘We are working to estimate impacts to seafood infrastructure from four hurricanes over the past two years,’ said LSU Sea Grant’s Dr. Rex Caffey.

‘But we can only conduct damage assessments for those businesses where we have data.’
Using a model devised after Hurricane Katrina, the economic assessment is based on financial records.

‘We’re basing the valuation on a company’s revenue, and then adjusting that appraised value with survey-derived damage curves for maximum storm surge and wind speed.  While the approach is revenue-driven, the valuation captures the physical assets of a fishing business – including the value of vessels, vehicles, buildings, equipment, supplies and inventory.’

The Louisiana seafood industry is more than boats, docks, buildings and machinery.
‘Four months after the storms, roads, power and water have been restored to most of the area, but our seafood industry still struggles because its infrastructure remains in shambles,’ said Patrick Banks, Louisiana Department of Wildlife and Fisheries.

‘Docks are damaged; processing pulverised; needed ice and cold storage almost non-existent. In addition the highways that our fishermen rely upon – the bayous, the channels and the bays – are filled with debris and hidden obstructions making it almost impossible to go fishing.’

Patrick Banks believes the waterways are an important part of the seafood infrastructure, but the US Coast Guard is responsible for only the removal of boats blocking water access or leaking fuel. Clearing the waters of hidden debris and obstacles falls to the parishes and the state.

‘After Katrina the Department of Wildlife and Fisheries received a grant from NOAA to clear debris from the waterways,’ he explained.

‘As the coalition prepares a funding request for legislators in Baton Rogue and Washington, it is vital to have this project included.’

According to Louisiana Shrimp Task Force Chair Andrew Blachard, one third to a half of the state’s infrastructure was lost to Ida, even more if you factor in the losses from the three hurricanes the previous year.

‘In our area alone most of our docks and processing plants were either destroyed or badly damaged. We have a few docks that are able to unload shrimp, but it has to be shipped off to other locations for processing.’ he said.

‘The problem rebuilding these facilities are updated codes requiring new building techniques or rebuilding in a new location.  It remains a question if any plant can afford to rebuild and still remain economically viable.’

He said there are fewer than five processing plants currently operational within the state.

‘Recently passed legislation required restaurants to serve Louisiana shrimp and seafood, but these storms have completely disrupted our supply chain and the ability get the state’s seafood on the plates of customers. Our boats can’t get on the water, the landing docks are damaged and there is reduced processing capacity, not to mention the damage to our ice houses and fuel docks.  This is not good for our state’s image as the place to come to eat great seafood, it will hurt us economically,’ he said.

‘This could be the final nail in the state’s seafood industry coffin.’