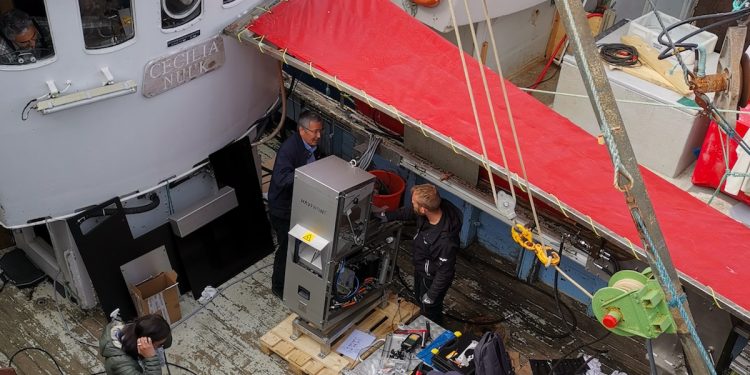 There has been a surge in demand for the Loppa compact heading and gutting machine developed by Måløy company Havfront, initially in Norway, and also in Greenland where the Loppa with its small footprint has turned out to be ideal for coastal fishing boats.

After a few years of trial and error in the development process, there are now around fifteen machines in full-time operation at sea, and the workshop is busy producing another five and there are more orders that have already been placed for next year.

Now sales have taken off in Greenland with three Loppas installed recently and the first of these has had a month’s use, with the satisfied crew reporting that the machine has made life easier for everyone on board.

Havfront is part of the Måløy Maritime Group (MMG) and according to the company’s general manager Marius Strømmen, Loppas have been fitted to three <15 metre boats this summer.

What has made the process smoother is having MMG project manager Laetitia Pipaluk Rosing as part of the team that travelled to Greenland this summer from Måløy. As she comes from Nuuk, she has been able to bring to the project both language skills and cultural understanding, bridging gaps that could otherwise have presented obstacles.

‘Fishermen in Greenland have long been looking for a machine that handle gutting and heading fish on board,’ Marius Strømmen said, adding that in Greenland all fish must be gutted before being landed, which can be heavy work on a small boat, crew shortages in recent years have added to the problem, so being able to simplify work flows on board is important, leaving crew to concentrate on fishing.’

‘Fish has to be gutted for delivery, and the fishermen have to do this themselves. Fish reception facilities in many parts of Greenland are modest, so Havfront has come up with a product that is in demand and many of the operators of smaller boats are looking to innovate. Developing a machine that makes fishermen’s lives easier is something we are proud of at Havfront.’

The Loppa is easily the smallest machine of its kind on the market anywhere. At 1.20 metres in height, it needs less than half a square metre of deck space. The machine weights 200kg and is easily installed. According to Martin Lie, it is also easily maintained and most fishermen are happy to look after this themselves.

The machine is made to handle fish in the 1-10kg range, with a 20 fish per minute throughout rate, so a single operator can gut and head fish father that the whole crew of most smaller boats.

Niels Boasson of the Greenlandic Association for Fishermen and Hunters (KNAPK) is Havfront’s point of contact in Greenland.

‘With good connections to the Greenlandic fishing industry and a reliable product, we don’t have any worries about ending more machines to Greenland, even though it’s a twelve-hour journey there and there’s a four-hour time difference,’ Martin Lie said, adding that a number of fishing vessel owners and skippers are looking at the possibilities the Loppa offers.

‘We spent our time well in Nuuk this summer,’ Marius Strømmen added. ‘We are excited at the potential in Greenland, and delighted at how satisfied the fishermen have been with the reliability and efficiency of the Loppa machines we have supplied so far.’