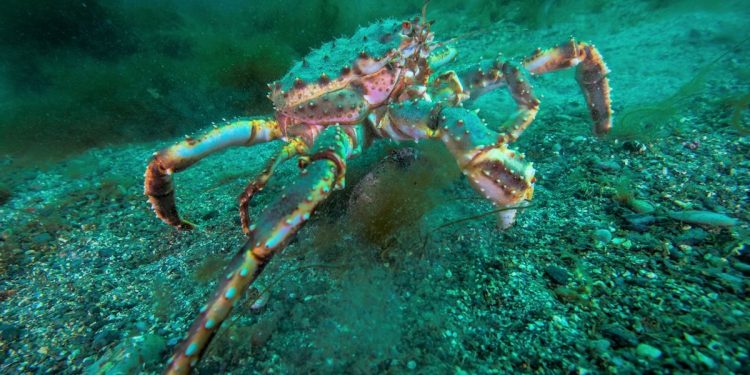 Scientists at Norway’s Institute of Marine Research have recommended an increase in the 2021 king crab quota to 1780 tonnes from this year’s 1530 tonne quota. Outside the quota-regulated area, the recommendation is for free fishing.

Management objectives for king crab are to maintain a long-term fishery in a limited area in Aust-Finnmark, and at the same time to limit the spread of the species as much as possible outside this area. A relatively high level of fishing effort is expected, but not so much as to endanger the stock’s stability.

The stock is estimated on the basis of landing data and an annual research survey extending across fjords and open sea areas in the quota-regulated area.

During this year’s September survey, researchers counted crabs using trawls, pots and video, using a towed vehicle deployed at 0.5–1 knots, about 1 to 2 metres above the seabed.

‘The video method was tried out for the first time during last year’s cruise. The plan is that video will eventually replace sampling with trawls,’ said research manager Carsten Hvingel.

West of North Cape, a trap survey was carried out in June, mainly at the same stations that have been checked previously.

At a total of 59 stations, where two pots were allowed to soak for about 24 hours, the researchers caught a total of six crabs. These were taken at Sørøya and Seiland and the number is significantly lower than in 2019.

‘It indicates that the free fishing has been so extensive that it kept the stock down to a low level. But no matter how great the effort is, individual crabs will still be able to escape and generate new populations further west’ Carsten Hvingel said.

In addition, there is now a possibility that larvae can drift with the current northwards, and research is being conducted into whether or not the crab can spread to Bear Island and Svalbard.

King crab were seen in the Barents Sea in the 1960s and 70s, with significant consequences for the region’s benthic fauna.

Researchers also take samples from permanent stations of animals from the seabed of the large fjords in the quota-regulated area. The findings show that larger mussel, starfish and brittle stars disappear in areas with high densities of crab.