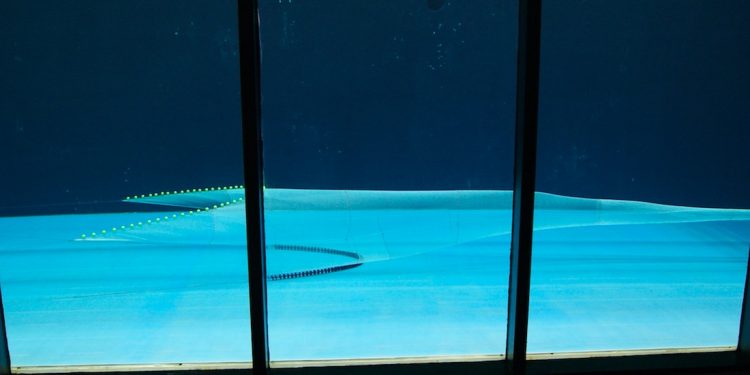 A new version of the 88.40 metre Bacalao trawl that incorporates some key innovations has been performing well. Among those who have long experience of the Bacalao trawl are the skippers of Viðey, the newest fresher trawler operated from Reykjavík by fishing company Brim.

It seemed right to involve skippers Jóhannes Ellert Eiríksson, known to every one as Elli, and Kristján E. Gíslason, better known as Kiddó, in the design process for a new and very different demersal trawl, alongside Hampiðjan’s designers.

He commented that a couple of years ago they began looking at the options for improving something that already worked well, and the ideal candidates to try out new ideas were Viðey’s skippers Elli and Kiddó.

‘We really started to see progress around a year ago. We carried out several trials with a scale model in the flume tank, and after that we tried out a prototype on board Viðey,’ Vernharður Hafliðason said.

‘The changes and improvements we made are primarily in the belly of the trawl, using Advant netting instead of the usual Magnet Green, and we broadened the trawl’s opening. The remodelled belly section gave us better flow through the trawl, less slack netting and fewer gilled fish. As part of the design process we also made efforts to minimise abrasion damage to the gear. What was a surprise was how the belly and codend lifted clear of the seabed. Using Advant netting gave us a smaller twine surface area, resulting in lower resistance, so we saw that we had to add floats to make up for this. To achieve more spread, which is of key importance in a demersal trawl, we altered the cutting rates in the wings and also used larger, more open meshes in the front sections,’ he said.

Elli and Kiddó are more than happy with the co-operation with Hampiðjan.

‘We have been using these Bacalao trawls since Viðey was delivered. After the development work, the new trawl has a 20% better spread and we’re seeing a higher headline height at around 5 to 6 metres. We added a belly section and made changes to the cutting rates. That has got rid of the hump in the top sheet behind the square. We’ve been using this trawl continuously now for three months. It fishes better than the old gear and there’s been no damage so far, which is fantastic,’ Kristján E. Gíslason said.

Skippers Elli and Kiddó were in agreement that the new trawl design should have the Jagger name, drawn from the initials of Hampiðjan’s trawl gear designer Jón Ásbjörn Grétarsson, who passed away in 2014 before having reached his fiftieth birthday.