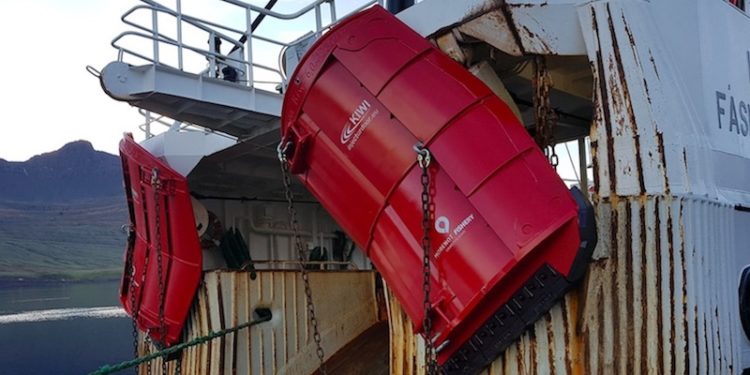 Based on the principles that went into its Sparrow doors, Injector reports that its new Kiwi doors are fishing well.

‘It’s a new multi-function door that is based on the same design technology as our new Admiral pelagic model,’ Injector’s Eystein Elttør said.

‘We can say it’s an updated version of the Sparrow doors, which were in turn a development that combined the qualities of the Stealth F15 pelagic doors and Cobra demersal doors, and like the Sparrow doors, the Kiwi is a higher-aspect door compared to most demersal trawl doors.’

He said that as the Kiwi generates high spreading power, some trawlers that also have pelagic quotas have been able to use the same doors with their pelagic gear, without the need to switch to pelagic doors.

‘They are also used in semi-pelagic mode, with both the doors and the trawl either off the bottom or towed wit minimal ground contact,’ he said, commenting that the Kiwi doors can be produced in a much lighter construction than the Sparrow doors for the same surface area.

‘We can do this without compromising quality or strength. We saw that the Sparrows were sometimes too heavy for trawlers that did not have the power to tow or haul such heavy doors.’

Several sets of Kiwi doors have already been sold to New Zealand, and Injector’s agent there reports that one of their customers fishing with a 3 square metre pair of Kiwis completed three capacity trips, and still had fuel left for two more.

‘This is unheard of and the owner was over the moon,’ Eystein Elttør said.

Go to the latest issue of Hook & Net for the full story on Injector’s Kiwi trawl doors.