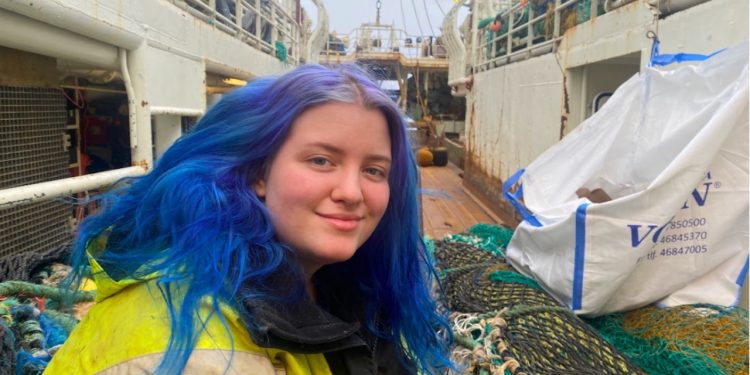 Nineteen-year-old Stine Pettersen was looking for a job that paid well, and that brought her to a profession in which only four percent of workers are female.

‘Fishing is a great profession in which you earn well. You have to be ready to work, and it can be hard at times, but when you have free time, you’re completely off and your time is your own,’ she said during as port call by Nergård trawler Kågtind, where she is on the of the apprentices, and is now in her seventh trip.

This has been a good trip for Kågtind, landing a record 600 tonnes of saithe caught during a 14-day trip, a result good enough for the company to send a spread of cakes on board for the crew.

At the end of last year, 360 women and 9144 men in Norway had registered fishing as their main occupation, and Stine has followed with interest the recent debate about women who on the receiving end of bullying and harassment in the workplace.

‘I have fortunately not experienced anything like that, and only have good experiences with my colleagues on board Kågtind. As women on board, we must have to stick up for ourselves, because this is a male-dominated profession, but everyone has a responsibility to contribute to a good working environment,’ she said, adding that there are some jobs she isn’t asked to do, such as the extremely heavy lifting – but there are also male crew who can’t do these jobs.

‘Nobody should wear themselves out doing jobs that can’t cope with. It’s about having a boss who sees what tasks you can do. This is the case in all professions, so there is no difference between jobs on land or sea.’

A trip for Stine is for four to six weeks and it’s are for a trip to be broken to land, as on this occasion.

‘You’re at work all the time. The incentive is that you have the same number of weeks off after the trip. You need the rest periods between trips, because the job is physically demanding, whether you work on deck or in the factory,’ she said, commenting that normally she likes to sleep in, but has fallen into a pattern of sleeping for three of the six hours of every free shift.

‘Three hours is more than enough. If I sleep more, I get too tired to start work again,’ she said.
Stine Pettersen grew up on Napp, and perhaps it is her fisherman grandfather is the real inspiration for choosing the fishing profession.

‘Or maybe because I moved to Senja and lived next door to the high school? It seemed exciting to become a fisherman. It is a tough but lucrative profession with an average salary after completing an apprenticeship of around one million kroner.’

‘If you want to try, then go for it,’ Stine Pettersen said.

‘It never hurts to try something out, and as a high school student you have plenty of time to figure out what you want to do. If it suits you, and you become a fisherman, then you have chosen a tough profession that is well paid, and which gives you a lot of free time.’