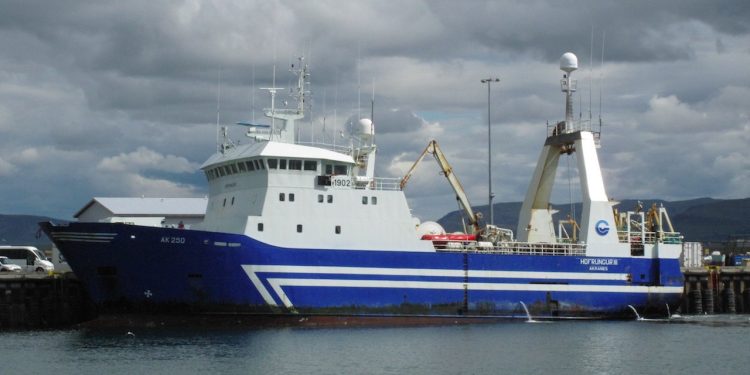 Brim’s factory trawler Höfrungur III AK-250 has docked after a 27 day trip across grounds south and west of Iceland, and skipper Haraldur Árnason and his crew found themselves on the run from haddock for most of the trip as quotas to cover any haddock by-catch are tight.

‘We’ve done well. We had a green weight of 800 tonnes for 27 days’ fishing. There would have been a better catch if there hadn’t been haddock getting in our way everywhere,’ he said.
‘I hear the haddock quota was lifted by 8000 tonnes a few days ago, but I understand that comes off next year’s quota.

Höfrungur III sailed on 8th April and docked in Reykjavík this week.

He said that they started fishing on the Eldey Bank and spent most of the trip there.

‘We were asked to concentrate on saithe. That went well enough but wherever we dipped a trawl in the water there was a by-catch of haddock. Even on well-known golden redfish grounds we were getting some haddock as well, and I think I’m right in saying that we had 80 tonnes of haddock, even though we avoided it as much as we could. There’s a lot of golden redfish over a wide area, but skippers have had to hold back on it because their haddock quotas are so small.’

A half-landing was made ten days into the trip, equivalent to a green weight of 370 tonnes of fish.

‘After that we headed for the south-west grounds. We were mostly in the Eldey Bank area. We didn’t try the Selvogur Bank, as those grounds were closed off when we started fishing. We had a quick look in the Skerja Deeps but didn’t stay long. We were expected to catch some Greenland halibut as well, and so we went north to the Westfjords grounds for that. The Greenland halibut grounds are off the Hampiðjan Square and we also went all the way to Geirsstaðir, which is WSW of the Hali grounds. That area is a long way off, not far from the Dohrn Bank,’ Haraldur Árnason said, adding that fishing for Greenland halibut wasn’t as productive as they had hoped due to the heavy sea ice in the area.

‘We managed one decent day, and then the ice drifted across and that stopped us fishing. From there we went to the Víkuráll Gully and did well on saithe. We had production running all through the trip, apart from the days we spent looking for Greenland halibut,’ Haraldur Árnason said.