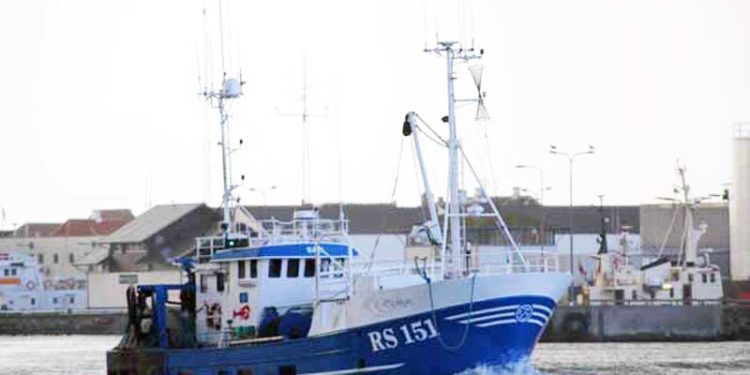 Ejner Thomassen is normally a cheerful fisherman, but the news in January a year ago that the Kattegat sole quota had been cut by 42% due to insufficient data was painful, especially as the fish were practically queuing up to come over the rail.

Things are better this year and he said that the Kattegat is teeming with fish. Ejner Tomasson and Ejca RS-151 are doing well so far this year.

‘We had some good tows just after New Year,’ he said, commenting that he had had to lease more quota, 4000kg at DKK20 per kilo.

Prices have also been good in the first part of January, with plaice fetching DKK14 per kilo.

The introduction of the discard ban has caused problems that he is not finding it easy to adjust to.

‘Before, if we kept undersized fish, we’d get a fine. Now we get a fine if we don’t keep them,‘ he said.

‘The idea of R03;R03;throwing viable small fish over the side goes very much against the grain. A high proportion of the fish we catch will survive being put gently back into the water and we can catch it later.’

‘Last autumn we had inspection vessel Havternen visit us and out of the 270kg of fish we had, there were only 6.50kg that were undersized, so we are talking only about a small percentages of discard which makes it even more absurd that we should be forced to land them. The few fish that do not survive being put back in the water are taken care of by the gulls,’ Ejner Thomassen said.

‘In my opinion we are not damaging the seabed. A small trawl and a pair of 63 inch trawl doors does not harm the seabed or the biodiversity. We also make an important contribution as we catch anything from plastic waste to paint cans and we bring all of that in, which contributes to a cleaner marine environment.’