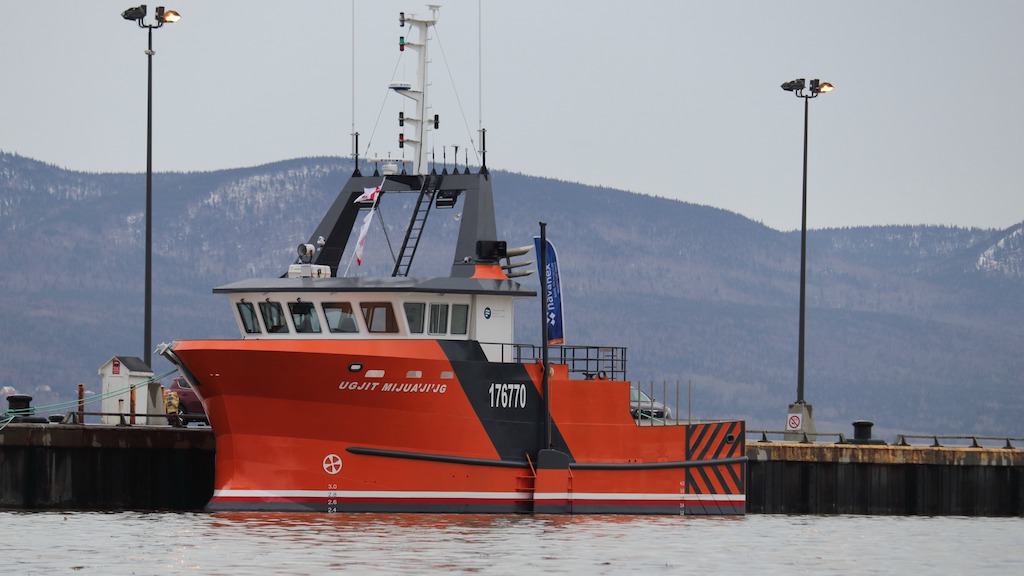 Crabber/trawler Ugjit Mijua’ji’jg, designed by Navanex and built by Chantier Naval Forillon, has been handed over to its owners, the Listuguj Mi’gmaq Government, an indigenous Canadian community on Quebec’s Gaspé Peninsula.

The 19.81 metre LOA by 7.31 metre beam newbuild is a combination crabber and groundfish trawler, and the third vessel that Chantier Naval Forillon has built for the Listuguj Mi’gmaq Government.

Ugjit Mijua’ji’jg is designed to alternate fishing for snow crab with trawling for shrimp and other demersal species.

The steel-hulled Ugjit Mijua’ji’jg has a raised fo’c’sle with an aluminium pilot house. When crab fishing, the clear aft deck can carry up to 150 collapsible, 100lb crab pots. When rigged for trawling, a gantry with two net drums is mounted over the stern. A platform after of the raised fo’c’sle has been prepared for a pair of trawl winches to be mounted.

The designers have included features to make the vessel comfortable for a crew of up to seven people. A newly designed bulbous bow, in addition to improving fuel efficiency, helps reduce pitching when working gear into a swell.

A pair of stabilisers follow a design first installed by Chantier Naval Forillon on the trawler Fundy Leader in 2006. A number of these systems have proven effective on other vessels.

Propulsion power is provided by an IMO-compliant tier III, Cummins QSK19 producing 750hp at 1800rpm, coupled to a Twin Disc MGX-5222 gear with 5.04:1 reduction. This turns a four-blade Rice Kaplan Skewed propeller with a 57-inch diameter and a 67-inch pitch. The prop’s thrust is enhanced with a Rice Speed nozzle. This system will give the vessel a cruising speed of nine knots and a bollard pull of 8.2 tonnes.

To meet the IMO tier III emissions, the QSK19 main engine is fitted with an SCR after treatment including DEF (Diesel Exhaust Fluid) injection unit. The system utilises pressurised air to atomise the DEF for better mixing and a complete chemical reaction. This system allows for reduced consumption of DEF.

Multiple housing and configurations are available for these SCR after-treatment systems. Cummins technicians were able to take advantage of the significant space between the engine room deckhead and the top of the QSK19 main engine. The arrangement allows ample access to the main engine while facilitating ready access for technicians to the service panel. The engine and after-treatment system are integrated, controlled, and monitored through an electronic interface which displays system out NOx and NOx conversion efficiency on a monitor in the wheelhouse. On trials, the wheelhouse monitor reported NOx reduction of 91.2%.

The comprehensive set of deck equipment includes a Heila HLM 3-2S deck crane. For crabbing there is a crab hauler, crab table, crab boom and crab block. For trawling, in addition to the two trawl winches and net drums, there is a bag winch. The anchor winch is mounted so that the anchor will lower to the starboard side of the bulbous bow.

Crew accommodation is forward in the raised fo’c’sle with the galley and mess in the aft part of that cabin. The RSW-equipped holds have capacity for 27 tonnes of crab in four sections, plus there is an insulated bait hold.