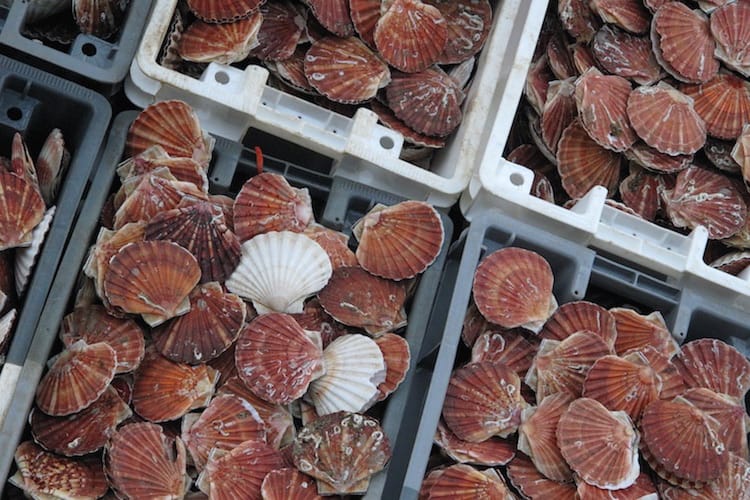 French fishermen’s associations claim that heavy fishing by British scallopers in the Baie de Seine is threatening to wreck thirty years of management.

The National Committee for Maritime Fisheries and Fish Farming (CNPMEM) has accused the UK fleet of looting French waters as an estimated 50 UK scallopers have been fishing 12 miles off the French coast for the last week.

‘French fishermen do not understand this behaviour, which is happening in spite of all previous agreements,’ said a spokesman for CNPMEM, adding that with British fishermen not yet out of the EU, they are already behaving like raiders. This is organised looting.’

‘All the management efforts implemented by French fishermen working with Ifremer scientists are about to collapse,’ CNPMEM said, stating that French scallopers are strictly regulated with measures that include mandatory VMS, a closed season from May to October and a 92mm minimum ring size, as well as weekly quotas and restrictions on the number of trips per week.

‘There are 300 smaller vessels working off our coast and we oppose the British taking advantage of the sustainable management that France has worked on for so long. The UK and Ireland have multiplied their fishing effort by five in less than ten years and the market is now flooded with frozen scallops from the UK, that are caught off our own coast.’

According to CNPMEM, France has made every effort to share responsible management opportunities with Britain and Ireland with selective gears and managed fishing effort, and an agreement that the UK scallopers would not work in the Baie de Seine before 1st of November, respecting the closed season that the French fleet works to.

‘British vessels under 15 meters and Ireland have not respected this agreement. It seems that they are now caught up in a some kind of ‘Brexit mentality’ under which immediate profits are all that matter,’ CNPMEM said.

‘For all these reasons and threats to the scallop resource, French fishermen through their various fisheries associations, producer organisations and committees have appealed to the Minister for Fisheries Alain Vidal firstly to contact his British and Irish counterparts to find a constructive solution, secondly to go to the European Commission. For the moment, only the thing that is regulated is the minimum scallop size.’