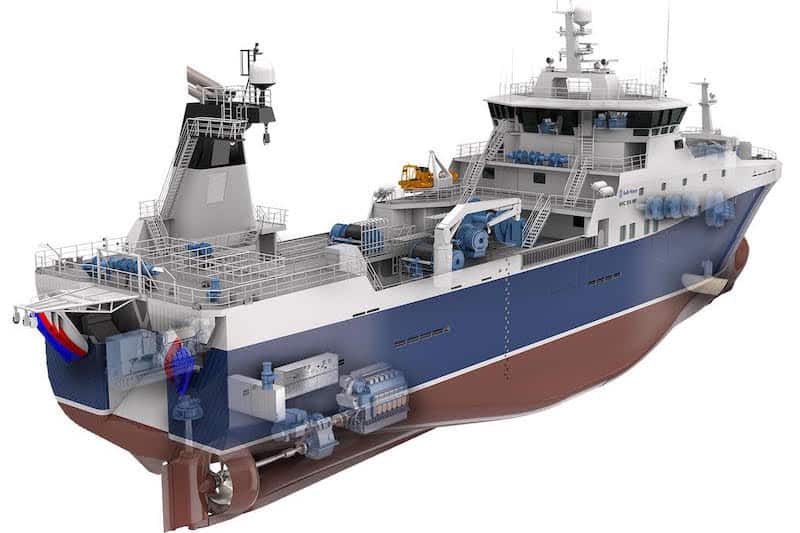 French fishing companies Compagnie des Pêches, based in Saint-Mâlo, and the Boulogne-based Euronor are to get a new factory stern trawler in September 2017.

The 80 metre filleter stern trawler is to be built at the Kleven yard in Norway to a Rolls-Royce NVC 374 WP design and will be built with a complete fillet processing deck and a 1400 cubic metre refrigerated hold, as well as a fishmeal plant and a 500 cubic metre fishmeal storage hold.

The deal includes a great deal of Rolls-Royce input in addition to the design, including the main engine, thrusters, automation, hydraulic winch systems and a fuel-efficient wave-piercing design.

‘This is our fifth fishing industry related contract this year, of which four are to be built by Kleven,’ said Jan Emblemsvåg, senior VP Ship Design and Systems at Rolls-Royce. ‘We are looking forward to deliver one of the most efficient and modern fishing vessels in the world.’

Euronor (Comptoir Des Peches D’Europe Du Nord) in Boulogne is owned by UK Fisheries, in turn owned by Samherji in Iceland and P&P in Holland, and Compagnie des Pêches is part-owned by the same group. Earlier this year Samherji negotiated a contract for two factory stern trawlers to be built at Kleven to the same Rolls-Royce design for its German subsidiary DFFU.