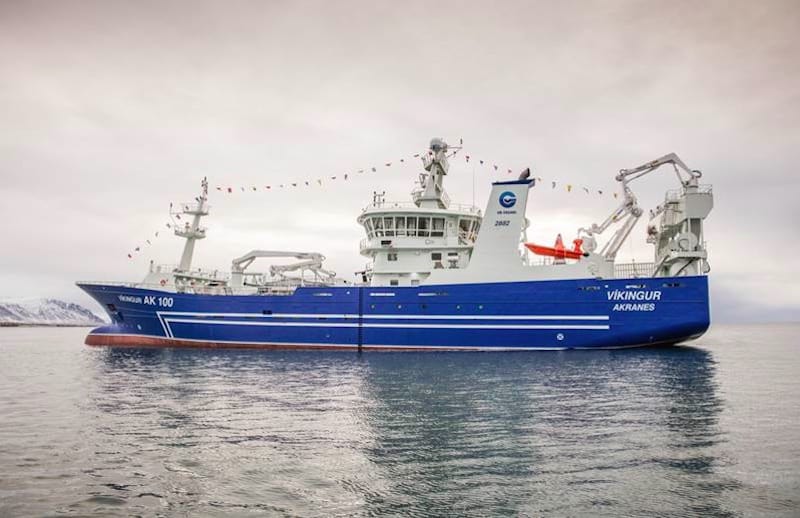 Icelandic fishing company HB Grandi has taken delivery of the new Víkingur, which docked at its new home port of Akranes at the weekend.

Víkingur AK-100 joins the identical Venus NS-150, which was delivered in May this year. The two new pelagic vessels replace the Lundey which has been laid up and is for sale, Faxi and Ingunn which have been sold to Westman Islands company VSV and the elderly purse seiner Víkingur which has was last year sold to be scrapped.

The company’s two new pelagic trawler/purse seiners have been built to a Sawicon design at the Celiktrans Deniz Insaat yard in Turkey, which is also building three fresher stern trawlers for HB Grandi.

Víkingur and Venus each measure 80.30 metres overall and have a 17 metre beam. Each has a Wärtsilä 9l32 main engine, developing 4500kW and driving a 4000mm diameter Wärtsilä controllable pitch propeller via an SCV90 2-P58 reduction gearbox with an AKV 2600kW shaft generator.

The new vessels have capacity for approximately 3000 tonnes of fish in 12 RSW tanks.

Víkingur arrived at the weekend after an uneventful 13-day delivery trip from Turkey under skipper Albert Sveinsson. Víkingur is expected to start fishing early in the new year.

A welcoming ceremony for the new ship is being held today in Akranes.