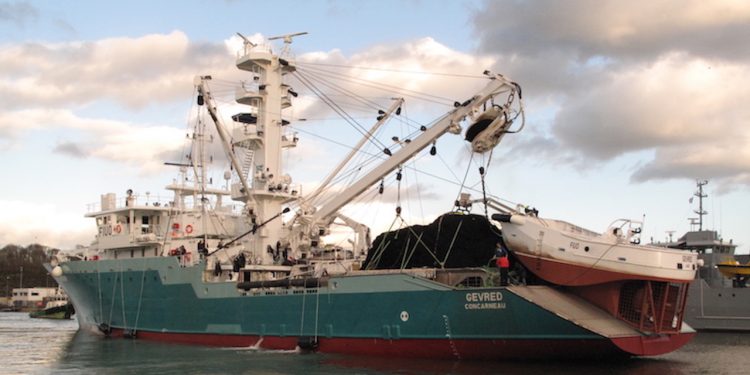 Fisheries Ministers from Comoros, Madagascar, Mauritius and Seychelles met at the Indian Ocean Commission (IOC) Fisheries Ministerial Summit, where they analysed the potential socio-economic impact that some of the proposals made by other governments for the 26th session of IOTC (16-20 May) could have on their coastal communities.

Ministers also met representatives of Europêche’s Tuna Group (AGAC/OPAGAC, ORTHONGEL, and ANABAC who joined the group) to address the situation of tuna fisheries in the Indian Ocean. The sector stressed during the summit the substantial contribution from the Indian Ocean purse seine fleet to the local economies of the IOC countries.

Out of the 42 purse seiners operating in the area, 13 fly the Seychellois flag and three the Mauritian flag. These vessels fish, land, use port facilities, shipyards and canneries of IOC countries, creating jobs across the whole fishery supply chain.

‘When tourism collapsed during Covid, the economy relied on the tuna purse seine activity,’ said Philippe Michaud, consultant at the Ministry of Fisheries and the Blue Economy, who hosted the meeting in Seychelles, commenting that fishing companies continued to send crew, chartered flights at their own costs, kept their vessels fishing and supplied local canneries, despite the global pandemic crisis.

The common declaration signed by the four ministers after a closed session in the afternoon recognises the importance of strengthening cooperation amongst the IOC countries dependent on the purse seine fishery for their canneries through coherence and coordinated approach for safeguarding their economic dependency and in the management of tuna fisheries.

The tuna sector argued that while the Seychellois and European purse seine fleets operating in the Indian Ocean have endured a reduction of more than 22% of their catches since 2014, some other IOTC countries which are among the biggest harvesters have objected to the yellowfin rebuilding plan amended in 2021.

‘With countries like Oman, which caught around 7000 tonnes of yellowfin tuna in 2014 and reported nearly 70,000 tonnes of catches in 2020, it is no wonder why the stock keeps declining,’ said Anne-France Mattlet, Director of Europêche’s Tuna Group.

‘This also explains why IOTC overall catches increased by 6% despite the tuna purse seine fleet’s hefty reduction in effort. IUU practices, such as the use of large-scale drift nets, forbidden by the UN in 1991 and reiterated by IOTC in 2017, are ongoing in the Indian Ocean and some IOTC countries are ignoring the perverse effects of those gears in the ecosystems.’

Yet, for the 26th session of IOTC, countries such as Maldives and Kenya are turning a blind eye to these threats to the stock’s sustainability and propose instead to reduce purse seine yellowfin and skipjack catches by an additional 20% respectively.

They also insist on imposing a three-month closure to the FAD fishery, without any scientific assessment of the FAD reductions that already took place in the last few years. Houmed M’Saidie, Minister for Agriculture, Fisheries and Environment in Comoros, stressed that ‘Proposals should be science-based’.

The four Ministers agreed on the fact that ‘all fishing gears targeting tuna have an effect on the population and the ecosystem and therefore all shall contribute in a balanced and equal proportion to any reduction decided at IOTC.’