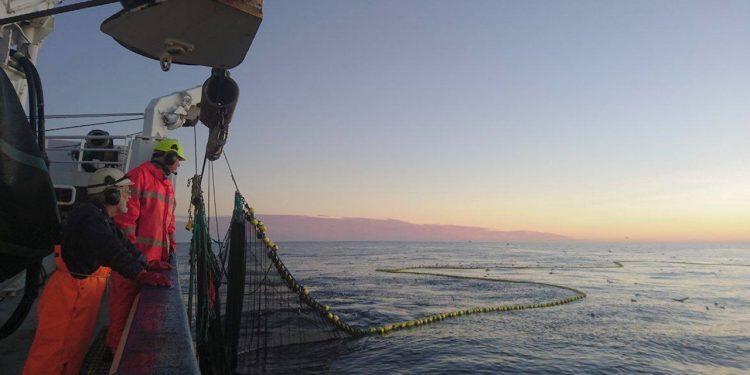 Norwegian pelagic vessels operating in Icelandic waters to catch capelin under the agreements relating to this stock are at a disadvantage, according to vessel operators’ federation Fiskebåt, which has written to the Minister of Fisheries to point out that it sees this as an unfair situation.

Fiskebåt points out that there is a limit on the number of Norwegian vessels participating at any one time, that for them the season is short, as they vessels can only fish for capelin north of 64°30’N – plus they are restricted to fishing only with purse seine gear. This is a restriction that Fiskebåt states does not apply to Icelandic, Greenlandic and Faroese vessels which are able to fish with trawl gear.

In addition, the capelin this season are sitting deeper than usual, placing them on the limits of what can be done with a purse seine.

Therefore, Fiskebåt is requesting that the same rules be applied to Norwegian vessels as to others fishing for the same species and in the same fishing areas.

This year’s overall quota is 904,200 tonnes, of which the Norwegian fleet has the right to fish 145,382 tonnes. This is also the first substantial capelin quota in Icelandic waters for some years. in the 2020-21 season the Norwegian quota was just 41,808 tonnes, and for the two preceding seasons there was a zero quota.

‘Right now there are four to five Norwegian vessels in the Icelandic economic zone and the feedback is that the capelin is deep, and it is therefore not easily accessible to vessels fishing with purse seine gear. Neither Icelandic, Greenlandic nor Faroese fishing vessels are subject to the same gear restrictions as the Norwegian fishing fleet,’ Fiskebåt states in its letter to the Minister of Fisheries.

‘Fishing is now largely with pelagic trawls. Heavy trawl activity can mean that the capelin will be more scattered, making it even more difficult to fish with purse seines than in previous years.’
According to Fiskebåt, the Norwegian authorities have for some years made efforts to reach an agreement on the same conditions being applied across the board, and to eliminate the special conditions that apply to the Norwegian pelagic fleet.