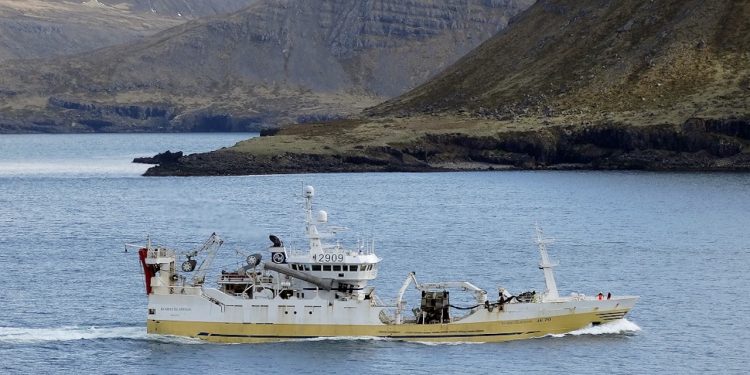 The Icelandic fleet has been doing well since the blue whiting fishery in Faroese waters got underway.

Samherji’s new pelagic vessel Vilhelm Thorsteinsson last week made its very first landing, delivering 3400 tonnes of blue whiting to the FF Skagen factory in Denmark, while the Síldarvinnslan fleet has been landing to the company’s own factories in the east of Iceland.

Bjarni Ólafsson delivered 1800 tonnes of blue whiting to Neskaupstaður yesterday, while the company’s factory in Seyðisfjörður is starting production with a 1650 tonne landing by Hákon.

Bjarni Ólafsson’s skipper Runólfur Runólfsson reported that the trip was four tows of between 10 and 18 hours.

‘The biggest haul gave us 640 tonnes and the smallest was 250, with a short tow and enough to fill the tanks. We were fishing on the Thomson Ridge in the grey zone south of the Faroes. There’s a good amount of fish to be seen in patches there. Fishing is mainly from the evening through to the morning, and it’s a lot slower in the middle of the day,’ he said.

This week Brim’s two pelagic vessels have also been busy, with Víkingur landing 2700 tonnes in Vopnafjörður after four days’ fishing while sister vessel Venus was heading back to fishing grounds after a capacity landing.

‘We have been getting from 300 tonnes up to around 700 tonnes in a haul, and we took six tows this trip,’ said Víkingur’s skipper Hjalti Einarsson.

‘This has certainly started well, but I recall that the season often starts well and then the fishing drops away. The question is how the fishing develops over from now on,’ he said, commenting that as usual, there’s plenty of activity around the blue whiting fishery.

‘There are sixteen Icelandic pelagic vessels on the grounds. There are some from the Faroes, two from Greenland and quite a few Russians,’ Hjalti Einarsson said.