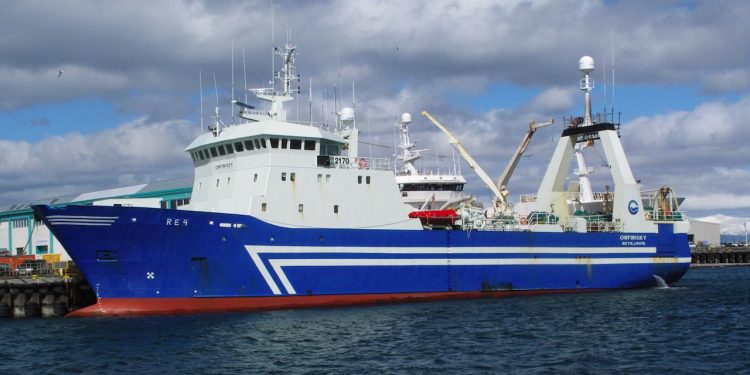 Brim’s trawlers have been working through a long spell of heavy weather off the west coast of Iceland that has left them dodging the worst of it, or heading south of the country to less stormy waters.

Fresher trawler Helga María sailed from Reykjavík yesterday after landing the previous trip’s 150 tonne catch. Skipper Friðleifur Einarsson is satisfied with catch rates for the days the weather has allowed them to fish, describing recent trips as being mostly a battle with the elements.

‘The Westfjords fishing grounds have been mostly off limits for weeks because of non-stop heavy weather. This time we had a window that let us start fishing in the Thveráll Gully, but we only got as far as Heiðardalur before yet another storm hit us with full force,’ he said, adding that the weather forced them shift to grounds off the south coast.

‘We can say that we ended up on our home grounds. Most of the time was spent on the Mountains and we had some time in the shallower end of the Skerja Deeps and then the Reykjanesgrunn grounds. There’s hardly any direct fishing now for golden redfish, as there’s so much of it that we get enough as by-catch with saithe and cod. Sadly, the scientists have other opinions, but that’s a story for another day,’ he said.

He’s satisfied overall with the way fishing has gone. There are some stringent demands, but Friðleifur Einarsson said that it’s important to look at the actual time spent fishing, as weather conditions are beyond anyone’s control.

‘It’s as well that there have been a few good showings of saithe at regular intervals, and most of our catch this time was saithe. In addition, we had golden redfish and cod. We didn’t go far enough into the Skerja Deeps to find any deep redfish,’ he said.

For freezer trawler Örfirisey, the most recent month-long trip hasn’t been an easy one, according to skipper Thór Thórarinsson.

‘It’s been one long bout of heavy weather. We were able to fish when the weather moderated, and in reality the overall catch was far more than we could have hoped for. We had a green weight of 980 tonnes, and discharged 400 tonnes in a half-landing in Reykjavík after the first part of the trip,’ he said when he and his crew docked in Reykjavík after around a month at sea.

There were difficult conditions for the whole time, plus there was a breakdown north of the Westfjords and Örfirisey was alongside in Ísafjörður for three days while it was repaired.

‘We couldn’t fish on Westfjords grounds at the start of the trip, so we started south of Reykjanes. Fishing was decent in spite of the weather and we had mainly saithe, deep redfish and golden redfish. After our half landing, we went back to the south-western grounds. There was a good showing of saithe on the Mountains for two days, and then the fishing died away and it was time to head northwards to the Westfjords grounds,’ he said, adding that they began on the Kópanesgrunn area west of the Westfjords.

‘We towed north-east along the bank all the way to the Hali grounds. There was good fishing along the bank, with some fine, large saithe. But there wasn’t much on the Hali grounds. We towed eastwards along the Djúpáll gully, and that’s when we had the breakdown, with even worse weather forecast. Vigri towed us to Ísafjörður and we sat out the storm while the repair was carried out.’

Once the work had been done, the next stop was the Reykjafjörður Gully, where there was some good fishing for haddock.

‘From there we headed to the Thveráll Gully where there had been good fishing for cod for a few days, but that was all over by the time we arrived. The forecast for the Westfjords was terrible for the coming days, so there was nothing for it but to head back south to finish the trip there,’ Thór Thórarinsson said.