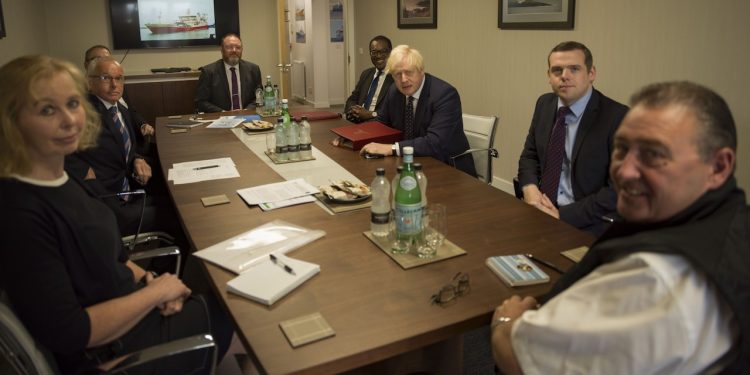 Scottish fisheries leaders have urged the Prime Minister to help them build back the industry after the bad Brexit deal, which left skippers battling for fishing opportunities while EU vessels continued to have full access to UK waters.

At a business meeting in Fraserburgh, they asked Boris Johnson for action not words on improving prospects for the fleet in five years’ time when the arrangements are due to be revised.

‘The Prime Minister has spoken previously of an El Dorado of fish from 2026 onwards but we are seeking a commitment from him to deliver much better opportunities for the Scottish fleet in the meantime as well as in the longer term,’ said Elspeth Macdonald, chief executive of the Scottish Fishermen’s Federation.

‘In the short term it will be a case of survival for the industry, but we want to thrive, and to ensure that we can build back this industry we need to start planning now.’

In the meantime, Mike Park, chief executive of the Scottish White Fish Producers’ Association, pressed Mr Johnson to order an independent review of the “flawed” science behind proposed quota cuts from ICES to key species such as cod for 2022.

‘Lack of fishing opportunities for our key commercial species at a time of abundant stocks is holding the whitefish fleet back severely, and it’s about to get a lot worse because of over-zealous faith in flawed science. With the Covid-19 pandemic, the value of accurate science has become glaringly obvious, yet in our sector jobs and income for the fleet are at risk from partial, single-source science that is totally at odds with what skippers see daily on the grounds and is never subjected to independent review,’ he said.

‘We need scientific evidence that can command the trust of everyone to help deliver secure and sustainable fishing.’

With the Prime Minister due to visit an offshore windfarm, Elspeth Macdonald also called on him to establish a clear principle for developers of avoiding fishing grounds when locating turbines.

‘More renewable energy is clearly vital in the fight against climate change, but we need also to recognise that fish is a healthy protein foodstuff with a very low carbon footprint compared with all other animal and many plant-based sources,’ she said.

‘As well as the lack of fishing opportunities, the industry is facing a spatial squeeze as offshore wind grows. The wind blows in many more places than fish swim, and for both sectors to flourish, decisions must be made that allow for us to co-exist successfully.’