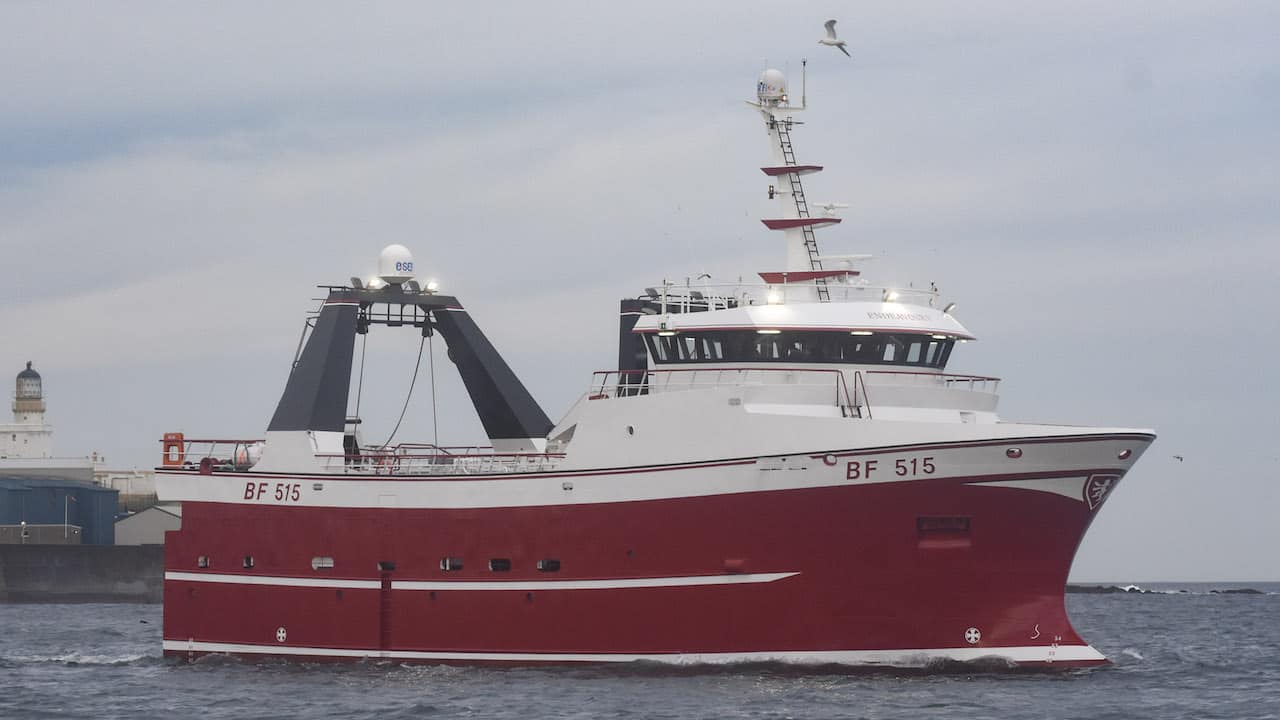 The first trawler to be built at Macduff for skipper Peter Lovie, Endeavour V, is the latest instalment in a relationship that goes back 35 years – and the yard’s largest newbuild to date.

The design and build process behind the 34 metre LOA, 10.50 metre breadth Endeavour V began in 2017 when the owners approached the yard, looking to improve fuel efficiency, service speed and sea keeping compared to their existing vessel.

To achieve these requirements, Macduff Ship Design concluded that to achieve this a longer ship, free from the constraints of registered length, would likely be required. It was at this point that the yard first went to the Wolfson Unit in Southampton and an initial trial was carried out using CFD technology to assess the differences in calm water hull resistance between the existing model and a new longer concept model.

Results indicated that a significant reduction in hull resistance could be achieved with a longer hull form, however, the computational based analysis could not assess the differences in sea keeping qualities. A further trial towing representative scale models was carried out in the Solent University Towing Tank facility.

As well as confirming the reduction in hull resistance between the two models, tank testing enabled seakeeping properties to be measured and it was conclusive that longer hull experienced considerably less pitching motions along with lower bow impact from wave force.

The yard and Macduff Ship Design took the decision to lengthen the hull by a metre to seek further improvements in hull efficiency as well as affording a little more space within the vessel.

Construction plans were supplied to Finomar Shipyard, sub-contracted to fabricate the hull and wheelhouse, which were delivered to Macduff in November 2019.

The full outfitting was completed with Endeavour V departing Macduff less than one year later. Trials were conducted before the new trawler was signed over just before Christmas to the new owners who sailed on Boxing Day for their maiden trip. Early indications are that the hull is performing as anticipated with increased speed, reduced fuel consumption and improved sea keeping evident.

Endeavour V is arranged with four deck levels. Apart from the bridge deck, these run the full length of the hull. The wheelhouse is almost full width, providing excellent visibility in all directions, and large windows at the aft wheelhouse provide clear view over the trawl deck below. The wheelhouse electronics are from Woodsons and Furuno UK.

The overall layout is based on that of predecessor Endeavour IV, but makes use of the additional available space to increase crew comfort, fish hold capacity and working deck areas.

The main engine is an MAK 8M20C engine rated at 1060kW at 900rpm coupled to a free-standing Mekanord 650HS reversing gearbox with reduction ratio of 6.47:1, driving the large 3300mm diameter Kumera Helseth controllable pitch propeller. A low drag high thrust nozzle is fitted in way of the propeller and incorporates a triple rudder system to provide high turning force. The rudder and nozzle are supplied by BT Marine Propellers, and the MT5000 steering gear is from Scan Steering AS.

A hydraulic Kort Propulsion stern thruster is fitted aft above the propeller shaft with motor fitted in the engine room.

The full-length trawl deck is laid out with a full package of equipment and a hydraulic system supplied by MacGregor. The three 30-tonne trawl winches each have capacity for 2250 metres of 26mm warp, and are controlled by a Pentagon autotrawl.

Endeavour V works with a pair of Storm trawl doors from Vónin and a Morgère clump to spread the twin-rig gear, supplied by Jackson Trawls, who also supplied a full inventory of warps, bridles and other hardware. A Scanmar system monitors the doors and trawl configuration.

Included in the MacGregor package are triple 20-tonne sweepline winches, three 12-tonne bagging winches, a pair of 10-tonne codend winches and twin 13-tonne gilsons. There are an aft pair of gear handling winches and one forward, plus a 3-tonne fishroom winch. MacGregor also supplied the triple barrel anchor and mooring winch.

Codends are brought up the twin ramps aft, which are fitted with hydraulic stern gates. Forward of these are two flush mounted hopper hatches where the catch is sent to the pounds. Catches are transferred to the catch handling area amidships, which has been fitted out by Macduff for handling groundfish catches.

Sorted, gutted and washed fish are passed to the fishroom below, which has capacity for 2200 stacking fish boxes.

The fishroom is chiller system has arrays of cooling pipes on the ceiling and incorporated into the sub-flooring. Ice lockers in the fishroom can hold 10 tonnes of flake ice, plus a mixing tank allows production of slurry ice for premium chilling of certain species. The fishroom refrigeration and ice machines are supplied by Airo-Tech.