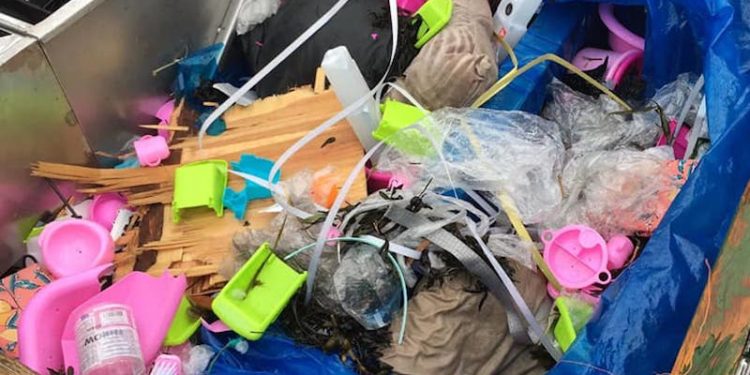 One of the world’s biggest container ships lost 270 containers during heavy weather in the North Sea last week and the consequences are to be seen on Dutch beaches where a cleanup operation is in progress. In addition to the pollution problem, floating containers also present a significant hazard to navigation. Fishermen from the north of Holland have been playing a role in the aftermath of the container loss.

Yesterday a flotilla of shrimpers from Lauwersoog, Kornwerderzand, Harlingen and other ports took part in the cleanup operation, collecting floating debris in their trawl gear and bringing it ashore for disposal. some fishing vessels had already towed floating containers clear of shipping lanes and fishing areas.

More fishing vessels from the north of Holland will be continuing these efforts today and on Monday, and probably for several days to come.

According to EMK, shoes, television sets and furniture continue to be washed up on beaches, and fishermen began reporting floating debris to Barbara Holierhoek of Vissersvereniging Hulp in Nood and Vissersvereniging Ons Belang in Lauwersoog and to Sarah Verroen at VisNed.

‘Fishermen wanted to do something, but it was not clear what could be possible. The situation is not safe as the locations of not all the containers are known, plus there are questions relating to liability,’ Barbara Holierhoek said.

‘We were quickly able to draw up a plan in collaboration with Groningen deputy Henk Staghouwer so we were able to get to work.’

She added that the fishing vessels’ deployment was co-ordinated with the Coast Guard and the Ministry of Agriculture, Nature and Food Quality quickly granted all of the necessary exemptions and permits.

‘Fishermen have experience with cleaning up waste at sea,’ said Sarah Verroen at Visned.

‘The majority of fishrmen’s organisations are partners in the Green Deal Fishing for a Clean Sea, as is VisNed. Every year, affiliated fishermen collect 300 tonnes of waste from the sea, which is dispose of ashore for further recycling and processing. But the amount that is now floating around is unimaginable. On the beach of Ameland alone, an estimated 200 tonnes have been cleared last Thursday,’ she said commenting that the expectation is that debris from MSC Zoe’s containers will take decades to clear completely.

‘We will see the consequences of this disaster for years to come’ said fisherman Jurre Kerkhof.

‘We are happy that we can also contribute something, although I am concerned about what we can continue to expect. There is bad weather forecast for next week, so we will see what more is washed up.’