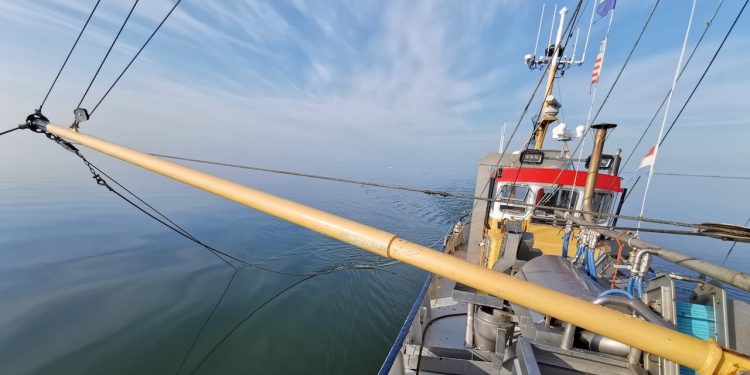 Dutch fishermen are preparing to demonstrate on Saturday, with around fifty Wadden Zee, North Sea and IJsselmeer fishing vessels congregating close to the Afsluitsdijk. The fishermen’s presence is expected to start at around 1100 on Saturday 14th August.

‘We want our voices to be heard in The Hague and Brussels. I want to run my business in a normal and healthy way. That’s what we are calling attention to,‘ said shrimp fisherman Bart Nieuwenhuizen, who with business partner Pierre Buis runs shrimpers WR-15 and WR-72.

‘We are asking the government to listen to what we have to say, and not to listen only to the environmental groups that are funded by the postcode lottery. I hope that the fishermen of the IJsselmeer, the Wadden Zee and the North Sea can show unity and commitment, and with the prospect that the leaders of our fishing industry organisations are finally sitting around one table, we hope that they’ll lock themselves away and not come out until they’ve agreed on a single organisation for all fishermen,’ he said.

Bart Nieuwenhuizen commented that the two boats provide a living for eight families, but those livelihoods are under threat – which is the reason for this protest.

‘There are new reserves in the North Sea and the Wadden Zee, and always more wind farms, pushing fishermen out. These reserves, closed areas and wind farms mean that fishermen are working increasingly smaller grounds,’ he said.

‘There’s constant government interference. We work hard at sea, comply with all the rules and regulations, but we are treated like criminals. It seems that the government is determined to wreck everything that works, and things that don’t function get support. For fishing companies it’s sad that things are going this way.’

Hoorn eel fisherman Jan Last commented that he and his brother work HN-35 and HN-3, fishing in the IJsselmeer, and they will be protesting on Saturday against the IJsselmeer and Markermeer from being turned from waterways into an industrial park.

‘If we don’t show ourselves as IJsselmeer fishermen, we will be forgotten by the public and by the politicians. We can’t afford this at a time when the IJsselmeer is given away to energy companies and environmental groups,’ he said.

‘It’s very uncertain whether my children will ever be able to take over the fishing business,’
He added that the decision to allow 89 wind turbines to be located on the freshwater lake is incomprehensible.

‘I’m expecting a big turnout Saturday with a lot of media attention, at least I hope so, because there’s so much nonsense dropped into the media by the green boys and girls who get millions in financial support from all sides and who have all the time in the world. Fishermen work five days a week, but if we don’t make time to protest, there will be no boats in the ports and no eels will be landed. That must not happen.’