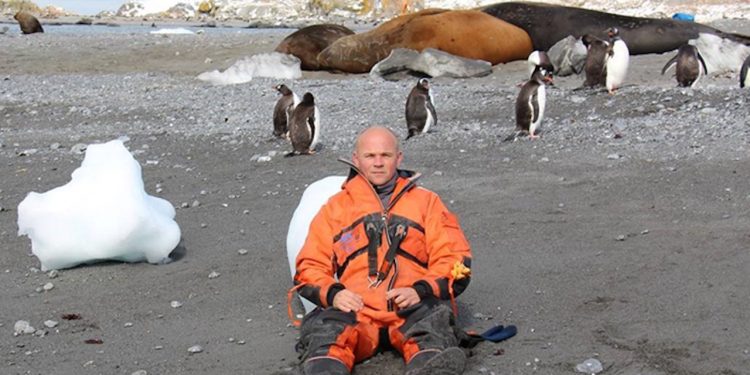 Ludvig Ahm Krag has been appointed Professor at DTU, where he heads the fisheries technology research group, replacing his title of senior researcher with the title of Professor of Fishing Gear Innovation – an area in which he has worked since joining DTU Aqua in 2003. The overall objective of fisheries technology research is to ensure better economic and biological sustainability in fisheries by developing tools, techniques, and methods that the fishing industry can use in practice.

DTU Aqua’s fisheries technology research has traditionally focused on the physical design of fishing gear. By changing the design of the gear, it can be made better at selecting the catch, so that it becomes more effective at catching desired species and sizes and reducing unwanted by-catches. The research group still has focus on conventional fishing gear development, but new technologies are becoming increasingly important.

‘We’re the first to have developed a camera system that can be attached to the trawl, so that the fisherman can see what he catches during the process. Today, fishing is a relatively blind process in which the fisherman has very little feeling with the species and sizes that are caught and no control over it, and it’s both an economic and biological problem,’ Ludvig Ahm Krag explained.

The underwater cameras provide such clear images that it is possible to identify the species, and the group therefore works with artificial intelligence and algorithms so that the species can be recognised automatically.

‘The new system will help fishermen make informed decisions along the way, so that they can better control and target their fishing operations during the process. In this way, economic and biological sustainability goes hand in hand, because, under the rules in force, the fishermen are rewarded for landing the desired catch and avoiding unwanted by-catches, he said.

‘We have a strong focus on implementing our research and the technologies we develop—all so that the fisheries sector can perform better,’ Ludvig Ahm Krag said.

The group’s research has always been application-oriented and has often left an imprint on the fisheries legislation.

‘Several of the fishing gear types we’ve developed have been implemented in the fisheries policy management, and most of the gear that forms part of the technical fisheries regulation today for our waters and in the North Sea has been developed by us or in collaboration with us,‘ he commented.

In addition to research, the group has an important role as a fisheries technology adviser to both Danish authorities and the EU. Teaching also plays an increasing role in the group’s work.

Ludvig Ahm Krag started his career as a commercial fisherman, before studying for a master’s degree in fisheries at the University of Tromsø (2002) and subsequently helped establish a start-up. He moved back to Denmark and became research assistant at DTU Aqua in 2003, was appointed researcher in 2009 and a senior researcher in 2015, when he also became research coordinator of DTU Aqua’s fisheries technology group.

Along the way, he has taken a PhD at Aalborg University in the subject of cod selection in towed gear.
Professor Ludvig Ahm Krag is also research co-ordinator of the fisheries technology research group at DTU Aqua. The group currently consists of three professors, four researchers, two postdocs, and three PhD students. Organisationally, it belongs to the Section for Ecosystem based Marine Management and is housed in the North Sea Research Park in Hirtshals.

The location in North Jutland facilitates the possibility of close contact with the fishing industry, fishing gear producers, and other frequent collaboration partners for the group’s research. The new professor attaches great importance to being in touch with the industry. He has several times participated in fishing krill at the Antarctic – which is one of the most technologically advanced fisheries in the world – and he regularly spends time on Danish commercial fishing vessels.

‘I try actively to go out fishing on different vessels in different fisheries. If you don’t have a completely up-to-date understanding of the practicalities of the different types of fisheries and what the challenges are, then you shouldn’t fool yourself that you can be part of the solution,’ Ludvig Ahm Krag said.