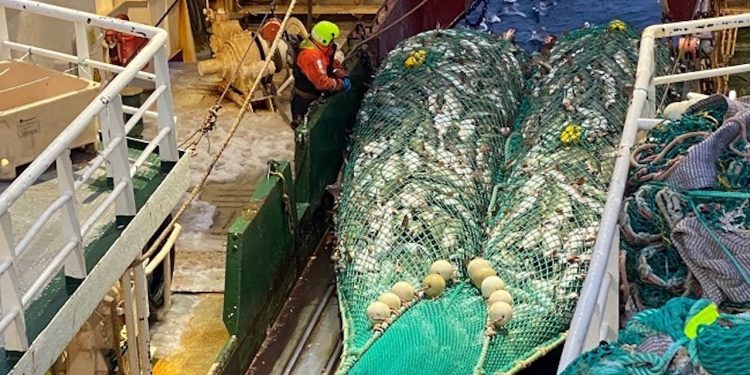 The Dohrn Bank that lies in the mid-way line between Iceland and Greenland used to be best known for its shrimp fishery, most of which lies on the Greenland side of the line. It’s been a long time since the Icelandic fleet showed this area an attention – until now when there has been some fantastic fishing there for cod.

The first on the scene was Samherji’s fresher trawler Björgvin, when skipper Ásgeir Pálsson decided that with slow fishing on home grounds, it was time to try something new.

A few days later Björgvin was landing a full trip of cod in Grundarfjörður, with the catch trucked to Samherji’s processing plants in Akureyri and Dalvík – and it hasn’t taken long for the rest of the fleet to also head to these offshore grounds.

‘We’ve landed our second trip. The first one went well, two and a half days to fill up, and this one was similar. This is large cod in great condition and with big livers. Our largest haul was 18 tonnes, but we try to keep them around 10-12 tonnes so that the finished products will be top quality and fetch the highest values. It’s not enough to catch as much as possible – quality and catch value are the most important factors.’

There have been up to fifteen trawlers working on these grounds in the last few days. Among others, Brim’s fresher trawlers Viðey and Akurey have also completed a couple of trips on the Dohrn Bank.

‘Around a third of our catch is eight kilo-plus fish, and they were stuffed with capelin,’ said Viðey’s skipper Jóhannes Ellert Eiríksson, docking in Reykjavík after his first trip there.

‘We have 15-16 tonnes of cod liver on board after the trip, and that’s an indicator of the size of these cod.’

Akurey has also completed a couple of full trips on the Dohrn Bank, landing once in Grundarfjörður and then in Reykjavík.

‘We had always been sure there was fish to be found there, but that there should be so much and that it should be such large cod was something I hadn’t expected. A lot of this is six to ten kilo cod. We were seeing fish up to 17-18 kilos. The catch handling systems on board cope well with fish up to 12-13 kilos, and we graded the larger fish to one side and I think every single one of these went into saltfish,’ he said.

‘The livers in these fish are amazing. I don’t think I’ve seen such beautiful, white cod liver before. We had 12-15 tonnes of liver in the previous trip,’ he added.

According to Ásgeir Pálsson on Björgvin, conditions aren’t easy there.

‘You can expect any kind of weather and there can be huge seas when there’s a north-easterly. The waves are pretty steep and close together, as the current runs hard. But it’s been fine for us during these two trips, apart from the first day. There can also be sea ice that you have to keep an eye out for,’ he said.

‘It’s around a fifteen-hour steam to Gundarfjörður and the trucks take the fish to the Eyjafjörður area for processing. There are other trawlers from Samherji and ÚA fishing there, so production ashore is being kept busy, which is just as well after the slow fishing we have seen for the last few weeks,’ Ásgeir Pálsson said.