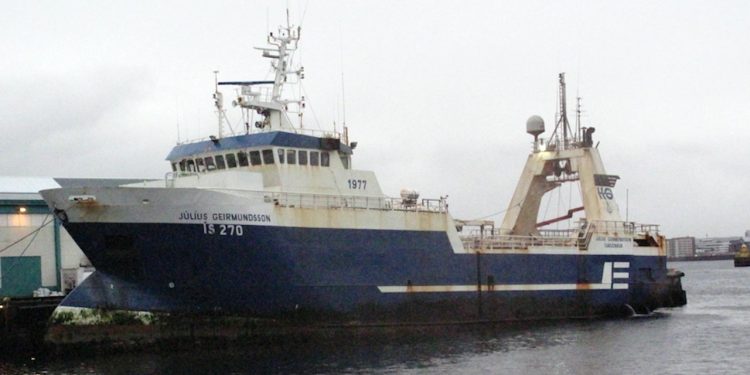 The case against the skipper of Icelandic trawler Júlíus Geirmundsson ÍS-270 came to court this week, during which he pleaded guilty to the charges brought against him.

During the controversial trip in September, an outbreak of Covid-19 swept rapidly through the freezer trawler’s crew. The Coast Guard were not informed of the outbreak, as is a requirement, and the skipper and operating company ignored requests for the ship to return to port when it was suspected that there were Covid cases on board.

During a call in port for fuel, the crew were screened and the majority of them tested positive. By the time the screening results were available, Júlíus Geirmundsson was already back at sea, but returned to port soon after the company was informed of the screening conclusions.

Júlíus Geirmundsson’s skipper was sentenced to a substantial fine and the suspension of his ship’s officer’s qualifications for four months.

According to local union Verkalýðsfélag Vestfirðinga, crewmen who were affected by the conduct of the skipper and operating company are relieved, as the verdict removes all doubt concerning their positions and the responsibility of the skipper and owners.

‘The health of most crewmen has fortunately improved, while those who continue to struggle with poor health can be sure that they maintain their earnings at the level they would have had while healthy and able to work. It’s almost three months since that trip, and while most of the crew have regained their health, this is not true of all of them and it is too early to be sure if they will regain their health completely,’ Verkalýðsfélag Vestfirðinga stated.

A spokesman for the union commented that several of the trawler’s crew have been in touch, describing their surprise that a period when they felt that their health and their lives were in danger, the punishment handed down to the skipper is comparable to that given to someone caught stealing a sandwich from a supermarket.

‘It can not be overlooked that this was not an accident or a normal illness. Wrong decisions were taken which caused crewmen serious harm. The social cost of this is already enormous, as is the financial cost to the operating company.’