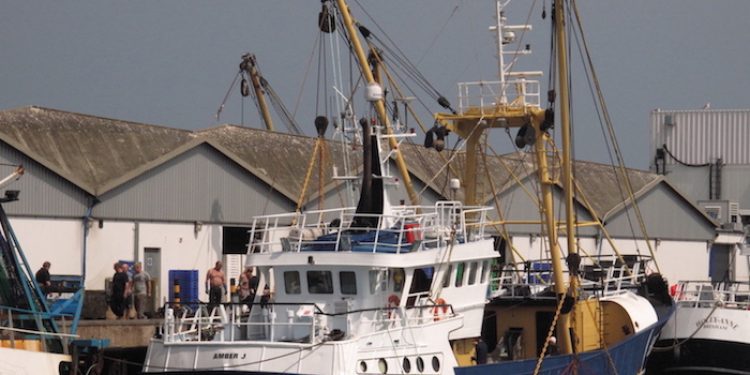 The exchange took place at the end of last year, with the former Lady Lou becoming Amber J. Built in 1992 at Maaskant Shipyards, the new Amber J replaces a trawler built in 1962, and provides owner Neil Watson and his crew with more options for both scalloping and trawling.

The company already runs scalloper/beamers Sylvia T and Jordan A, and all of the fleet was acquired over a period of years from Brixham operator Langdon and Philip. Amber J started off beam trawling before switching to scalloping, and has been fitted with a set of conveyors by Stride Engineering, who also lifted the rails. But with plans to fit net drums later this year and switch to stern trawling after the next scallop quarter, the boat’s stability requirements ruled out fitting tipping doors that are used on board the company’s other two boats.

Neil Watson said that the move to a larger, newer boat has made fishing more efficient, and Amber J can haul and turn around its gear in less than half the time this took on the older boat, giving them more time each day with the gear on the bottom.

‘We had to improve. After seven years with the old boat, we had to move on to being able to go scalloping properly, and we plan to be scalloping for the two middle quarters of the year and stern trawling for the winter. We have the net drums in the store and the same hydraulics run the drums as also run the scallop conveyors,’ Neil Watson said, adding that while the boat had been built as a beamer, it had operated as a twin-rigger for its original owners and it was only when it came under the UK flag that it was first used to fish with beam gear.

Switching to stern trawling later in the year is unknown territory for Neil Watson, whose experience is in beaming and scalloping, but he said skipper Tony Watkins and crewman Pat Beasley have plenty of trawling time behind them and the gear is being overhauled and checked by Clive Palfrey at Marine Co.

The new Amber J sails under the BM-224 number, which Neil Watson said has some family history to it, so he was pleased to be able to get the number.

‘That my grandfather’s boat’s number, and then my uncle Brian Trust had the number on his Boy Jamie, so we were very pleased to be able to get the number,’ he said, commenting that Amber J and Jordan A are named after his two children, while Sylvia T takes its name from his mother’s maiden name of Sylvia Trust.