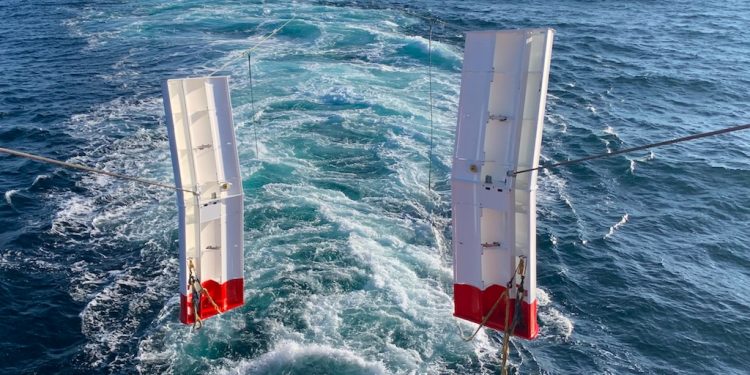 With the long test phase over, Thyborøn Trawldoor reports that its fully controllable trawl doors are on the market.

Tests were carried out on board Swedish pelagic vessel Themis over a long period to finalise and perfect the design.

‘We are that satisfied with the feedback from Themis and we have now made them 100% available commercially, and we’re open to supplying and customising systems for each of our customers who need a set of controllable doors,’ said the company’s Henrik Andreassen.

‘Themis has been using the doors for several fisheries and are very satisfied with the advantages compared to older regular pelagic doors.’

A second set of tests was carried out on board Shetland pelagic vessel Serene while it was in Skagen recently for annual maintenance. Serene has been supplied with a 15 square metre pair of Bluestream doors, plus Serene sailed for home with a second pair on board for Antares.

‘On the trials with Serene we shot the doors with a pre-set to maintain them at 30 metres below the surface. This was tested with different warp lengths and everything stayed in line,’ he said.

The depth pre-set is just one of the array of features that allow the doors to be controlled during a tow via the wireless communication system.

‘The feedback from Themis was that this is very beneficial when the crew are asleep and the skipper wants to make a small adjustment during the night. He can just change the setup on the trawl doors without having to wake up four or five guys,’ Henrik Andreassen said.

He added that the surface area and spreading force of the trawl doors can with this system be changed by up to 27%.

‘With a set of 15 square metre doors, you have every size covered all the way down to 10,95 square metres,’ he said.

‘This becomes extremely useful for the vessels operating across different fisheries. A further important feature is that with these doors you avoid any danger for the crew when adjusting the doors, since it can now be done remotely from the wheelhouse.’