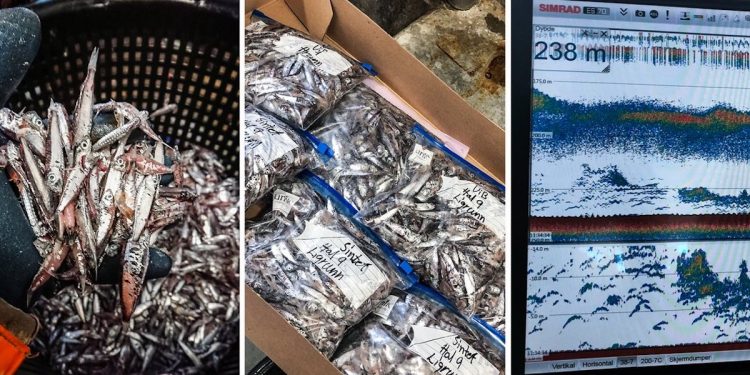 Catches of pearlside and krill in last year’s trial fishery

Around 1500 tonnes of pearlside and krill were caught during experimental fishing along the west side of the Norwegian Trench last year.

Liegruppen’s Ligrunn was one of four vessels that participated in this experimental fishery for mesopelagic fish species that live on zooplankton and which could potentially be a significant resource both as a human food and as a source of marine protein and marine oils.

‘Catches of mesopelagic fish being landed in Norway is something new, so this is an important step in this experimental fishery,’ said researcher Åsmund Bjordal at the Norwegian Institute of Marine Research.

Mesopelagic fishing has been tried in regions such as Oman, South Africa and Iceland, but this is still at an experimental stage, plus there are still challenges when it comes to stock estimation and effective capture technology.

‘We believe that one of the reasons this fishery has not attracted attention is because it is difficult to get profitable catches. The biomass is mostly thinly distributed over large areas,’ he explained, commenting that mesopelagic fish species are small fish that live between 200 and 1000 metres.

Pearlside is one of these mesopelagic species that is found along the western edge of the Norwegian Trench for much of the year, as well as being found further north.

‘The largest catches of pearlside were at the end of July,’ Åsmund Bjordal said.

‘This experimental fishery shows that it is possible to catch this fish in reasonably large quantities. The 2019 results have given us a starting point on which to build.’

The researchers will now map the stock’s distribution, composition and quantity in relation to the season.

‘Now it’s now up to us to find out how great the abundance is and how much we can recommend every year for a sustainable fishery,’ he said.

There are still plenty of questions that need to be answered. During the experimental fishery Ligrunn and Liafjord had a derogation to trawl without a sorting grid which would usually separate out saithe and other species, which could explain the differences in catch rates.

‘Our suggestion is that in 202 the same vessels could fish alternately with and without grids to evaluate whether this was the reason for differences in results,’ Åsmund Bjordal said, adding that a large loss of pearlside from the trawl was observed – indicating that there need to be developments in trawl gear to make this fishery more efficient.