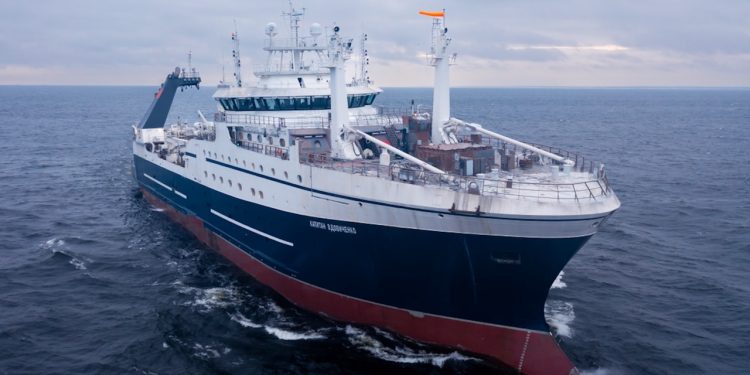 Danish processing systems specialist Carsoe had previously won a DKK800 million order to equip seven trawlers for the Russian Fishery Company (RFC), and has now strengthened its position on the Russian market with a further DKK500 million order.

After a process of testing, Carsoe has announced that it will be fitting out a further four of the 108 metre, 21 metre beam factory trawlers that the Russian Fishery Company is building to renew its fleet under the Russian government’s investment quotas initiative.

RFC had initially placed orders for seven modern new vessels with capacity to produce surimi at sea. Now the company has taken the step of ordering the same processing systems for a further four vessels under construction at the Admiralty yard in St Petersburg. Carsoe is playing a key role in the delivery of these eleven fishing vessels, ensuring that they will operate profitable thanks to the sophisticated processing systems.

‘The order for four more plants is a clear sign of RFC’s huge ambitions in the fast-growing market. Carsoe is now by far the largest supplier of value-adding floating plants, and the new agreement will fuel our growth well into 2025,’ said Carsoe CEO Hugo Dissing, adding that Carsoe’s net sales last year were worth DKK52 million, with a DKK21 million bottom line.

‘We have worked on this in close co-operation with our branch in Seattle and succeeded because of our proven, best of breed technology, which places us well ahead of our competitors.’

The new agreement will secure work for Carsoe’s 350 employees both in and outside Denmark. It also underscores the company’s ability to turn Danish technology and know-how into systems capable of making fishing vessels around the world more profitable.

The series of ST-192 trawlers are all to be outfitted with processing, packaging, and freezing facilities. Operating with crews of up to 150, these trawlers are designed to catch up to 60,000 tonnes each of Alaska pollock, herring and other pelagic species annually. These factory deck layouts ensure that high-value, consumer-ready products can be processed, packaged and frozen at sea, eliminating any need to defrost, process and re-freeze raw material ashore, which gives RFC a significant competitive edge.