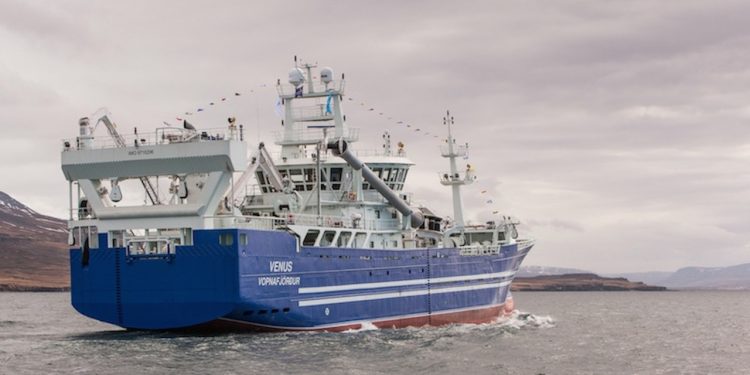 Brim’s production of capelin roe has began in Akranes, the first time for three years that capelin has been landed there.

Venus docked late on Monday night with around 500 tonnes of capelin on board and discharging was complete around midday on Tuesday.

‘We caught this capelin in Breiðafjörður, and the capelin are a long way further inside the bay than we are used to seeing at this time of year,’ said skipper Bergur Einarsson, adding that the roe maturity is excellent.

He commented that there has been little capelin to be seen in Breiðafjörður today, but there have been reports of a heavy migration off Grindavík.

‘That capelin isn’t suitable for roe production. It isn’t fully mature. But it will be fine once the fish have migrated northwards up to Snæfellsnes,’ he said.

Bergur Einarsson said that Venus’s sister vessel Víkingur is also at sea. Now what remains of the capelin quota will be used to catch as much as possible for roe production. The expectation is that capelin roe will be frozen at both Akranes and Vopnafjörður.

In the east of Iceland production of frozen capelin has come to an end at Síldarvinnslan’s plant in Neskaupstaður, as shore production waits for roe-bearing capelin to be landed.

Síldarvinnslan’s pelagic vessels Börkur and Beitir are off the west coast, on the same grounds as Venus had its catch, while Bjarni Ólafsson is on southern fishing grounds.

Greenlandic pelagic vessel Polar Amaroq has been freezing catches on board, and has so far this season landed six full fishrooms of frozen production, the last of which was at the weekend, before dodging through the weekend’s heavy weather as the last of the catch was processed.