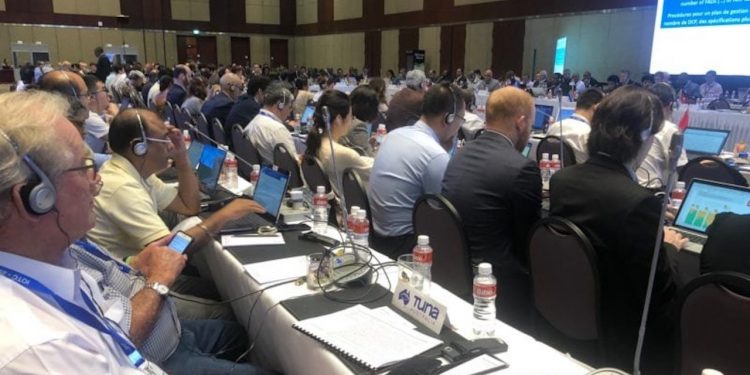 Australia’s delegation at the IOTC annual meeting put forward a strong case for maintaining a modest share of the Indian Ocean tuna catch, opening the way for Australia to argue for a share when quotas are allocated.

‘Outcomes from the meeting were favourable to Australian interests and were made possible by the concerted and skilful efforts of the Australian Government delegation, said Terry Romaro of Ship Agencies Australia, who attended the meeting.
The Australian delegation was led by Melissa Brown, assistant secretary and the Department of Agriculture Fisheries Branch, and it included senior advisors from the Department of Agriculture, AFMA and ABARES, along with Tuna Australia members Terry Romaro OAM, Kim Newbold of Hawkness Pty Ltd and Bert Boschetti of Latitude Fisheries Pty Ltd.
Australia currently has a domestic quota of 10,000 tonnes (1%) of tuna and billfish in the estimated million tonne total of the Indian Ocean Tuna fishery.
‘Industry insists on at least maintaining the existing Australian quota allocations made by the Australian Fisheries Management Association (AFMA) because we should actually be entitled to a larger share given the massive size of the Australian fishing zone in the Indian Ocean,’ said Terry Romaro, an alternate director of Tuna Australia.
In recent years, large distant water fleets have pushed to secure the majority of the proposed Indian Ocean tuna quota allocations based on catch history.
‘Our argument is that we’ve chosen to leave the fish swimming and multiplying, an approach known as banking the catch,’ said Terry Romaro, explaining that Australia has a lack of recent catch history, making it hard to justify its 1% share to IOTC on that basis.
‘We dispute the distant water nations’ insistence on using catch history to formulate allocations, because it’s from their current catch practices and subsidised fleets that some species are now being overcaught,’ he said.
As no consensus on the quota allocation was achieved at this IOTC session, the continuing discussions have been deferred to the 24th annual meeting in 2020 to provide more time to discuss and negotiate an acceptable outcome for all participating countries.

After attending his first IOTC meeting last year and seeing the pressure on the Australian delegation, Kim Newbold attended again this year to lend his support.
‘The formula needed to fish the Western Tuna and Billfish Fishery (WTBF) successfully is different now to the historic and traditional wet fish approach used by artisanal and short-range coastal fishers,’ he said.
‘The use of ultra-low temperature freezer tuna fishing vessels on a contracted basis for shorter and better-targeted operations in the year is essential for Australia to catch its proper share of the IOTC-managed fishery. The Australian fishery requires a framework that allows time and spatially-flexible involvement of commercially-efficient and less-interactively intrusive freezer vessels.’
Besides the quota allocation formula, the Australian delegation was interested in discussions on the yellowfin tuna catch reduction and reducing FAD numbers.
‘The number of FADs that the giant purse seine vessels from the European Union can operate was only slightly reduced from 350 active to 300 active units deployed at any one time,’ said Bert Boschetti of Latitude Fisheries Pty Ltd, who has fished the WTBF since day one.
‘But we are hopeful it gives the baby yellowfin tuna a slightly better opportunity to escape and breed.’

A cause worth fighting for

Terry Romaro has attended most of the IOTC meetings covering tropical tunas in the last ten years, as well as all the southern bluefin tuna meetings held by the Commission for the Conservation of Southern Bluefin Tuna.
He says that attending these meetings is critical to maintaining Australia’s share of international-managed fisheries.
‘We must keep vigilant to maintain and improve Australia’s stake in the international tuna industry as many powerhouse nations are only too happy to eat away at our entitlements. Our government needs to stay strong on the matter of our allocation share and not be prepared to cave into the demands of the super powers of tuna!’
Having been involved in the tuna longline industry for 52 years, he strongly feels that it’s a cause worth fighting for.
‘I believe that the WTBF Fishery, while  a developing fishery, has shown glimpses of being a significant money earner for Australia, and I would love to see it achieve that.’