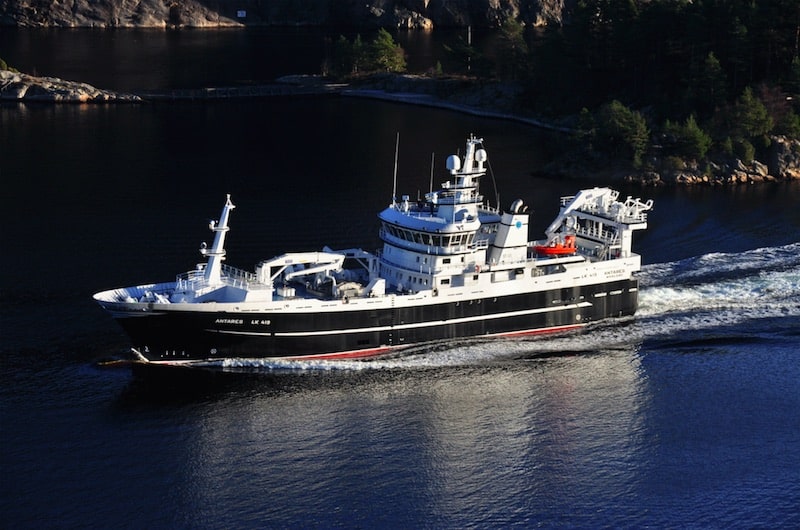 The Simek yard’s first newbuild fishing vessel since 2008 has been launched and christened last week. In recent years the yard at Flekkefjord in southern Norway has focused on the oil and gas industry, but with the downturn in that sector, Simek has returned to its roots in fishing.

The new Antares for Shetland company Antares Fishing Company was christened at the yard following sea trials last week, with the Whalsay-based company chartering an aircraft to fly in the crew and a number of guests for the ceremony, including the new Antares’ godmother Irene Irvine.

Antares is a Skipsteknisk ST-125 design, a combined pelagic trawler/purse seiner measuring 75.40 metres overall with a beam of 15 metres and a depth to the main deck of 6.30 metres. It has a 2425 cubic metre capacity in twelve RSW tanks and a heavy-duty 2x1600kW/ 2x1376000kcal/h RSW cooling system.

The hull was constructed in blocks at several yards in Poland and taken to Flekkefjord on barges for assembly at the Simek yard.

This is not the first time Simek has built for Antares Fishing Company, having previously built the 1978 Antares for the same owners in Whalsay.

Antares has a Wärtsilä 12V32 main engine delivering 6600kW and driving a 4000mm diameter propeller via a gearbox with a PTI for an 1800rpm diesel-electric drive and a PTO powering an alternator. Auxiliary engines are a pair of 1360kW Caterpillars.

After not having delivered a new fishing vessel since the Vik-Sandvik-designed Lunar Bow in 2008, Simek is staying with fishing vessels for the moment, with a new 55 metre Rolls-Royce designed longliner for Norwegian company Veidar under construction for delivery in December next year, as well as the new 82 metre factory trawler for New Zealand company Sealord, also a Skipsteknisk design, scheduled to be completed in March 2018.