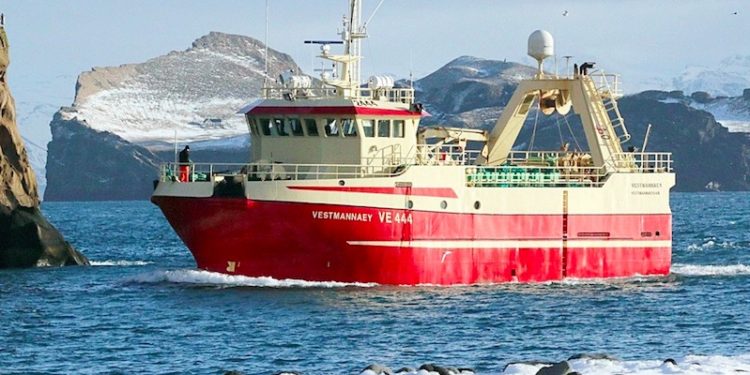 It’s now ten years since Icelandic company Bergur-Huginn took delivery of its trawler Vestmannaey in 2007. The 29 metre fresher trawler was built in Poland and replaced a larger freezer trawler as the company changed direction to focus on fresh landings.

Today Bergur-Huginn and its two trawlers, Vestmannaey and sister vessel Bergey, are part of Síldarvinnslan. The two trawlers have fished very successfully since they were delivered. A third vessel in the company fleet, Smáey, was sold in 2012 when it was clear that the company’s quotas were not sufficient for three trawlers.

Vestmamanney is reckoned to have landed 33,000 tonnes of fish over its ten-year career, with skipper Birgir Thór Sverrisson in charge for the whole of that time, and he is right now fishing for haddock on the Síðugrunn grounds.

‘We are chasing haddock and it has bene going well,’ he said. ‘Fishing has been outstandingly good since the strike came to an end. Our trips are normally one and a half to two days and that’s enough for us to get between 60 and 90 tonnes. We’ve been landing full fishrooms again and again, mixed fish but mainly cod.’

He said that since the strike ended in February they have landed 900 tonnes, and over the ten years he has skippered Vestmannaey the trawler has performed extremely well.

‘The boat is excellent and has fished well right form the first day,’ he said. ‘It’s a good sea boat, with good conditions on board and plenty of fishroom space. It’s also economic to run. We can say that this is a fine ship in every way.’

Sister trawler Bergey was delivered five months later and has also fished well over the years, skippered initially by Sigurður Guðbjörn Sigurjónsson. When he retired and stepped ashore, Bergey’s mate Jón Valgeirsson took over command. Bergey is slightly behind Vestmannaey in its tonnage, having so far landed 30,000 tonnes in its nine-and-a-half years of fishing.