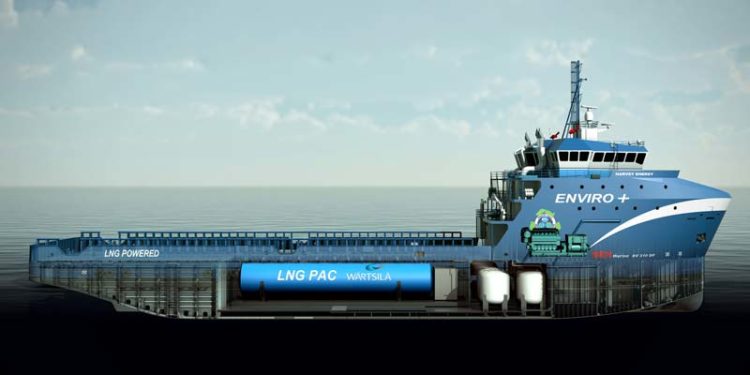 Wärtsilä, the marine industry’s leading solutions and services provider, has been awarded another contract to supply a complete liquefied natural gas (LNG) package, including the propulsion, auxiliaries and controls, for a new offshore support vessel designed by STX Marine, Inc. The ship has been ordered by Harvey Gulf International Marine as a part of the company’s ‘Going Green’ initiative. The vessel will operate in the Gulf of Mexico’s offshore oilfields.
This latest order is the fifth that Wärtsilä has received from Harvey Gulf for gas fuelled propulsion solutions. In October 2011, Wärtsilä technology was selected for two new Harvey Gulf offshore support vessels, making them the first ever U.S. flagged platform supply vessels (PSVs) to be powered by LNG. The order to supply gas propulsion packages for a further two Harvey Gulf ships was received shortly thereafter. The contract with Wärtsilä for this fifth vessel was signed in November 2012.

The switch to LNG propulsion is part of Harvey Gulf’s ‘Going Green’ initiative, aimed at reducing the environmental impact of the company’s vessels and operations. “These PSVs will be the cleanest burning vessels operating in the Gulf of Mexico,” says Chad Verret, Senior Vice President, Harvey Gulf International Marine. “Many permits for the eastern Gulf of Mexico already demand that operators use the best available capture technology with regard to particulates. In my opinion, the best available particulate matter capture technology is not to have any to start with, and that’s what burning LNG gives you,” he says.

“Wärtsilä is committed to reducing the carbon footprint from shipping through state-of-the-art propulsion solutions, and by developing integrated systems that enable ships to use LNG as fuel. In this we are clearly the global leader. By reducing fuel consumption through greater efficiencies, and by enabling true flexibility in fuel choice, we can significantly reduce emissions while also lowering operating costs. It is a pleasure to work with Harvey Gulf International Marine, a company that shares our commitment to these issues,” says Magnus Miemois, Vice President Solutions, Wärtsilä Ship Power.

Wärtsilä will supply the steerable thrusters, an Integrated Automation System, the Power Management System, a complete Low Loss Concept for the electrical distribution and drive architecture. All five of the vessels will be powered by 6-cylinder Wärtsilä 34DF dual-fuel generating sets capable of running on either LNG or conventional liquid fuels. The switch between fuels can be made seamlessly without loss of either power or speed. Wärtsilä will also supply the LNGPac LNG bunkering, storage and supply system.

In gas mode, emissions of nitrogen oxide are reduced by some 85 percent compared to diesel operation, sulphur oxide emissions are completely eliminated since gas contains no sulphur, and CO2 emissions are also reduced. Furthermore, the production of particulates is virtually zero since natural gas has no residuals.

Wärtsilä has been heavily involved in technology development for decades. As an example, Wärtsilä was a pioneer in introducing dual-fuel engine technology and during recent years has launched a series of gas engines.

More than 2000 gas fuelled Wärtsilä engines are now in commercial operation in both land-based and marine applications. Together, they have accumulated more than 7 million operational running hours; a milestone that emphasizes Wärtsilä’s leading position in gas and dual-fuel engine technology.

As the use of LNG as fuel became increasingly viable, Wärtsilä expanded its research and development activities into achieving efficient total integration of the entire gas propulsion system. In addition to the engines, this involves the automation and controls, the gas supply systems, and the onboard bunkering facilities, while the company’s global ship design capabilities enables customized ship designs for gas fuelled operation. Furthermore, the 2012 acquisition of Hamworthy significantly strengthened Wärtsilä’s capabilities in gas related solutions.

To date 19 LNG powered offshore support vessels have been ordered. Of these, 9 were designed by Wärtsilä Ship Design, 17 are powered by Wärtsilä machinery, and 7 are fitted with Wärtsilä integrated gas supply systems.