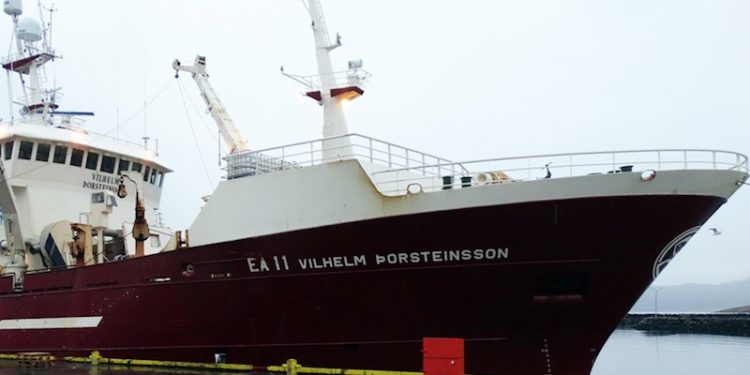 Vilhelm Thorsteinsson lands for the last time in Iceland

Samerji’s pelagic freezer trawler Vilhelm Thorsteinsson docked in Neskaupstaðar this week with 570 tonnes of frozen Atlanto-Scandian herring on board, making its last landing under the Icelandic flag before being delivered to its new owners in Russia.

Since the start of the season on 22nd September this year, Vilhelm Thorsteinsson has caught 9000 tonnes of Atlanto-Scandian herring, bringing to a close an 18-year career with Samherji since it was delivered new in 2000.

Skipper Guðmundur Jónsson commented that it isn’t easy to say farewell to such a successful ship.

‘This is a fantastic ship that has served both its owners ate crew well. The new Vilhelm Thorsteinsson is on the way in 2020 and that is also going to be a magnificent ship. On the other hand, it’s not a processing vessel so this is going to be a big change.’

He said that since it was delivered in 2000, Vilhelm Thorsteinsson has fished 968,000 tonnes and it has made 820 landings. Its annual catches have averaged 53,000 tonnes.

‘This ship has fished incredibly well right from the start. The owners have played their part in making sure there’s quota available and we have always had an excellent crew. I think there are five or six of the crew who have been here from the beginning,’ Guðmundur Jónsson said.

Vilhelm Thorsteinsson has been a regular caller at east coast ports and has often landed in particular to Síldarvinnslan’s factory and cold store in Neskaupstaður, as well as to the company’s other processing facilities in Seyðisfjörður and Helguvík.

‘Síldarvinnslan is a reliable company and we have always worked well together. It has been very useful for us to have Neskaupstaður almost as a home port, as it lies close to the grounds where we fish for pelagic species,’ Guðmundur Jónsson said.

Vilhelm Thorsteinsson’s original skippers were Arngrímur Brynjólfsson and Sturla Einarsson. In 2001 Guðmundur Jónsson took over from Sturla Einarsson and has been on board ever since, except for a two-year break while he skippered factory trawler Baldvin Thorsteinsson. Birkir Hreinsson took over from Arngrímur Brynjólfsson in 2006.