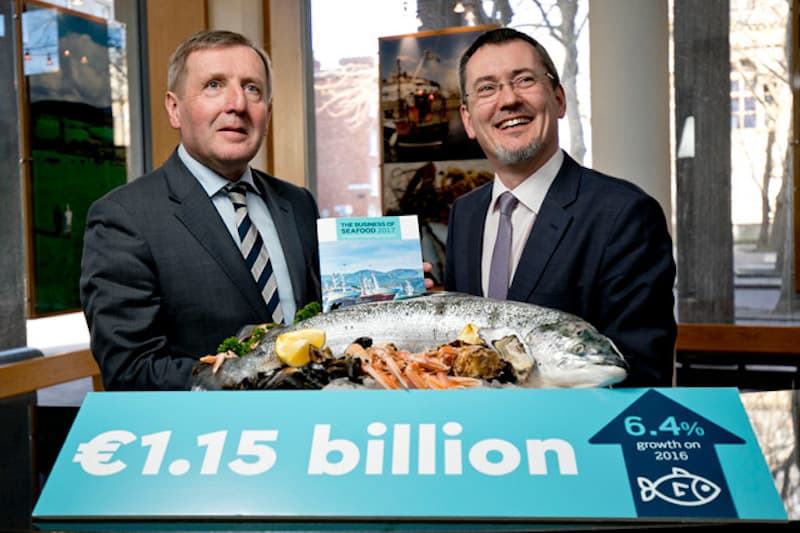 Ireland’s seafood sector recorded its third consecutive year of growth in 2017, with its value up 6.4% on the previous year, to contribute €1.15 billion to Ireland’s GDP. This strong growth was driven by a 12% increase in net exports (€331m), a 4% increase in domestic consumption (€429m) and significant investment both private and public (€386m) leading to the value of trade surpassing €1 billion for the first time.

This is detailed in The Business of Seafood 2017 report recently published by Bord Iascaigh Mhara (BIM).

‘This report is significant as it measures the value of the entire Irish seafood economy, capturing the value created at all stages from sea to plate,’ said Minister for Agriculture Food and the Marine, Michael Creed T.D.

‘It clearly demonstrates the scale and importance of the Irish seafood sector to our economy supporting over 14,000 jobs. From a government perspective, it’s encouraging to note how public investment is helping to strengthen an already vibrant sector to the benefit of exports and job creation particularly in rural and coastal regions.’

In terms of trade, the EU remains Ireland’s main export market valued at €392 million (up 9%). The report also demonstrates that Irish seafood is building significant growth markets across Africa, Asia and the Middle East all demonstrating double digit growth.

Fish and shellfish landed into main fishing ports by Irish and Non-Irish vessels rose 7% to €401 million with Killybegs achieving the highest value of landings, up 24% to €125 million. This is largely attributed to a 13% increase in mackerel landings worth €83 million. 78% of Non-Irish landings valued at €118 million comprised of hake, monkfish and megrim with 45% of these landings attributed to the French fleet.

On the domestic market, Irish appetites for seafood continued to grow with a 4% increase in seafood consumed in Ireland, now valued at €429 million. Domestic consumption comprises of sales in supermarkets and shops as well as in restaurants, cafes and canteens. Salmon, cod and prawns continue to be in favour with Irish consumers with salmon valued at €96 million and cod at €48 million. Growing demand from species such as pollack and hake are contributing new growth up 19% in 2017.

‘Over the last two years, the contribution of the sector to Ireland’s GDP has grown by over 14%. The fact trade sales have exceeded €1 billion for the first time demonstrates the clear demand for Irish seafood and it is important we build on this impressive performance as we collectively work to achieve the targets for seafood in the Government’s Food Wise 2025 report.’

Around the coast, over 14,000 people are employed, directly and indirectly, in the seafood sector and this value should not be underestimated.

‘As well as employment, seafood is a key driver in economic activity and in many cases is at the heart of the community,’Jim O’Toole said.

‘In Donegal alone, the sector accounts for 12% of total coastal employment. Seafood processing companies are growing in number and now account for half of the total employment in the Irish seafood sector. The revenue and employment seafood delivers to our overall economy and directly to our peripheral coastal communities is invaluable.’

Norwegian industry vows to keep seafood on the table